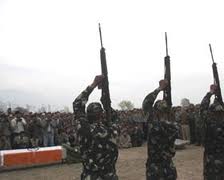 The Armed Forces Special Powers Act (AFSPA) is in the proverbial “centre of the storm” currently. A misplaced belief of its “draconian” nature is being exploited by some segments of society to fulfill personal agendas. Some on the fringes of the media glare and looking for free publicity pontificate on the issue; others look towards it as a political opportunity. The media, of course, laps up the proceedings with unmitigated glee. In the bargain national security is being trivialised and the Nation is being exposed to a huge security risk.

Though an oft written upon subject, the ongoing debate makes in necessary to, once again, reiterate the architecture of the Act to establish its nature and requirement. The Armed Forces (Jammu and Kashmir) Special Powers Act, 1990 came into effect on July, 05, 1990. Initially the Government had declared areas falling within 20 km of the line of control in Poonch and Rajouri and the Districts of Anantnag, Baramulla, Budgam, Kupwara, Pulwama and Srinagar as disturbed. Subsequently in August, 2001, when National Conference was in power in the State, the Act was extended to Districts of Jammu, Kathua, Udhampur, Doda and the whole of Poonch/Rajouri.

It may be noted that the extension was carried out when terrorism was on the wane. The intention was to provide more teeth to anti-terrorist operations by facilitating smooth functioning of the security forces across the State rather than in a few pockets. Even today this requirement is very much there; therefore, the premise under which the National Conference, which allowed the extension of the Act across the State, is now demanding its partial revocation is not understood.

There is no denying that AFSPA gives the security forces (Army, BS, CRPF and ITBP) some special powers. These include powers to search premises and make arrests without warrants, use force even to the extent of causing death, destroy fortifications/ shelters/hideouts and to stop, search and seize vehicles. However, the Act also stipulates that arrested persons and seized property be made over to the police with least possible delay; a stipulation that is being followed most persistently. The provisions of AFSPA do not deviate too much from the norms of protection provided to government servants and Police personnel through the Code of Criminal Procedure (CrPC) and other enabling legislations. Section 45 of the CrPC disallows arrest of public servants without prior sanction of the government; this section, however, is not valid in J&K where the Ranbir Penal Code is applicable and ipso facto, persons of Armed Forces can be arrested for any perceived excesses if AFSPA is not instituted. This fortifies the need for a protective umbrella for forces functioning in J&K. The Supreme Court has also mandated a Government sanction prior to initiating prosecution against police personnel for excesses or killings committed during the maintenance of law and order, thereby, police authorities still enjoy more encompassing and wider powers relating to arrest, search, seizure, summoning of witnesses, preventive detention etc than those vested upon the Army through AFSPA. The Act does offer protection to security persons acting in good faith in their official capacity but surely, not one person in India would grudge this protection for soldiers who are risking their lives for the cause of the Nation.

Adequate checks and safeguards are inbuilt within AFSPA. The Army procedures ensure minimum force during arrest/search of persons, opening of fire with due warning etc. Prompt disciplinary action is initiated against defaulters under Army Act 1950. The Army has, till date, punished 104 individuals (39 Officers, 09 JCO and 56 OR) for human right violation in J&K. This figure is in excess of those prosecuted by the JK Police and other Para-military forces functioning in the State. Are they not as liable to commit excess as the Army and have their excesses not been reported on many occasions? Why then are fingers being raised only against the Army which has, most aptly, demonstrated its seriousness in dealing with cases of human rights violations? In fact, AFSPA puts more checks on the Army than what a civil law would impose.

The Justice Jeevan Reddy Commission constituted in 2004 had, in its recommendations, stated that provisions of AFSPA should be incorporated in UAPA, 1967, which would be applicable to the whole country. The then Defence Minister, Shri Pranab Mukherjee, had stipulated that the “armed forces require protection while operating in disturbed areas”. The present incumbent, Shri AK Antony, has expressed similar views on the subject. This apart, in a case titled ‘Naga People’s Movement of Human Rights Vs UOI’, a five-judge constitution bench of the Supreme Court had ruled that conferring of powers vide Section 4 of AFSPA could not be held arbitrary or violative of Article 14, 19 or 21 of the Constitution. The Court went on to extend the powers of AFSPA to include interrogation of persons arrested and retention of weapons seized during operations.

The propagandist acrimony that is being generated against the Act in the public domain is hurting the image of the country’s Armed Forces due to no fault of theirs. The disciplined Indian Army simply caries out the task vested upon it by the Government of India be it related to external or internal security, disaster management on any other form of national emergency. In the performance of its duties it has earned the unstinting admiration and support of the entire nation. This unseemly debate is showing this nationalistic institution in a bad light. Naturally, the repercussion of demonising the army will go beyond the borders of the country and inimical foreign forces will exploit this chink in the Nations security. Undeniably, when the right time to revoke AFSPA comes the Army will stand by the political decision. In the meantime, it would be best to allow it to perform its duty unhindered and with complete support of the Nation.