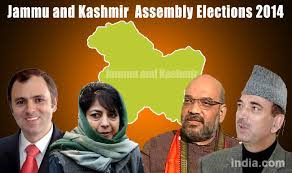 The maximum credit goes to the people who have, despite threats and grave personal risk, defied all odds and reposed faith in democracy and freedom. They have given a slap on the face of those who were instigating them against the democratic process at the behest of inimical foreign forces like Pakistan. The Kashmiri separatists who have been experiencing a steady process of political marginalisation stand totally isolated.

Even more creditable is the fact that the elections have been held in the wake of a major calamity in the form of debilitating floods. It is undeniable that the people of the state, the government at the centre and the state and the Indian nation put in admirable effort to overcome the flood disaster.

By virtue of its assets of manpower, equipment and infrastructure the Indian army was in a position to play the most significant role to overcome the calamity and it did so capably.  The security forces led by the army made an admirable contribution in bringing the adverse situation created by the floods to a stage where holding of elections became feasible.

Along with the effort to contain the natural calamity, the army also had to counter attempts from across the border to derail the elections through spread of terror. The recent infiltration bid in the Arnia sector of Jammu is a clear indicator of the nervousness of the terror masters across the border. They are desperately trying to build their strength of terror cadre and disrupt the elections. They are well aware that such infiltration bids are suicidal, yet, they are sending their cadre to certain death to fructify their evil designs.

Even as this article is being written, four terrorists have been killed while a few other are holed up in a bunker in the border area. The army has sent in Armoured Personnel Carriers (APC’s) to finish off the remnants. The massive response is with the view to close the operation as soon as possible so that its effect on forthcoming phases of the election is minimised.

Terrorists are making frantic attempts to strike for which reason they are coming out from their hideouts. The intelligence structure of the security forces is so potent that the moment the terrorists raise their heads information comes in and well planned, precision attacks lead to their decimation. It is for this reason that security forces have been achieving an astounding degree of success in counter terrorist operations in the Kashmir valley of late. The people have gained considerable confidence due to this success of the security forces and the same is being seen in the form of fearless voting.

The large turnout has led to considerable speculations about the result of the polls! Who will form the next government in Jammu and Kashmir is the question on everybody’s lips! It is quite evident that all political parties in the fray have pulled all stops in their campaigning. The competition is so stiff that even the most discerning analysts are unable to predict the outcome of the polls. There is, however, a palpable anti-incumbency against the National Conference (NC) and the Congress even as the Bhartiya Janata Party (BJP) is in a resurgent mode.

It is, however, the Peoples Democratic Party (PDP) lead enthusiastically by its patriarch, Mufti Mohammad Sayeed, which seems to be emerging as the leader of the pack. There is a widespread belief that if the BJP had not found a new vigour due to the “Modi wave” PDP may well have had a clean run.   This does not come across as a surprise since that party has been working hard over a long time to build on its grass roots support not only in its traditional turf of the Kashmir valley but also in Jammu and Ladakh, which is now paying dividends.

The large voter turnout, competitive campaigning and the dynamic political environment notwithstanding, a hung verdict with no party getting a clear mandate is expected in the state. Coalition may be imperative yet again. This is where the maturity of the political leadership will come in play. While forging an alliance, the leaders will need to respect the aspirations of the people and cut across political lines to give to them what they have voted for with exemplary courage and resoluteness.  The leaders will need to integrate the three distinct regions of the state and thensteer them collectively into the national fold as meaningful contributors in the national march towards economic growth and build up of national power. Ideology will have to be set aside in favour of peace, prosperity and development.

Democracy has triumphed in Jammu and Kashmir. The positivity being thus generated needs to be nurtured and exploited for the good of the people. This is possible only if sagacity and maturity marks the political process. It is sincerely hoped that this wonderful opportunity is not lost due to partisan politics.

(Author is a retired Colonel and active member of AAP)