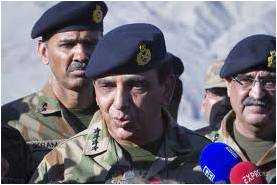 Pakistani Army Chief, General Ashfaq Parvez Kayani, seems to have made demilitarisation of the Siachen glacier by India and Pakistan a personal crusade. The elusive General who allows his government stooges, his Prime Minister and his President to do all the dirty talking has, recently, come out in the open with a demand for progress on demilitarisation of Siachen. With no positive response forthcoming from the Indian side he seems to have become petulant and irritated, probably because he is not used to a brush off.

In yet another visit to the avalanche afflicted locality of Gayari he has stated that “India has toughened its stance on Siachen”. The General added that India was now demanding re-determination of positions and that it takes two hands to clap, reported the Pakistan newspaper, Dawn.

It must not be forgotten that his initial placatory statement exhorting both countries to “sit together to resolve all the issues including Siachen,” was promptly shot down by the foreign office of the country, with a terse rejoinder that Pakistan would not contemplate any unilateral withdrawal. Doubtless, the foreign office would not have the guts or the gumption to shoot down Kayani without his express consent, hence, the whole thing smells of rotten eggs.

One is also quite surprised by Kayani’s sudden concern for the avalanche hit soldiers. At no earlier instance has any officer of the Pakistan army, let alone the Chief, had even minimal affinity or concern for the soldiers of the Northern Light Infantry who have died in this unfortunate accident. Mostly, this unfortunate segment of the Pakistan army, drawn from the colonised Northern Areas of Gilgit-Baltistan, is used as cannon fodder for misadventures like the Kargil incursion; So why this concern all of a sudden? Possibly Kayani visits the area to find a reason for making his demilitarisation statements, such is the degree of his desperation to get the agenda through.

India needs to be wary because whatever the Pakistan army does in not for the good of its people and definitely not for India; it does what is good for itself. There is a diabolic twist in this plot which India should try to decipher before taking a precipitate plunge.