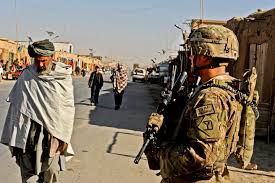 President Barrack Obama’s decision not to abandon Afghanistan is a welcome step as the war-torn country is not yet ready to defend itself. The US has invested so much in Afghanistan that an early pull-out of its forces would have been self-defeating. Already the US has lost 2,300 of its men. And it has cost the US approximately 110 billion dollars since its forces first landed in Afghanistan in October 2001. The Taliban’s brazen attempt to capture Kunduz last month is a case in point. That the Taliban insurgents could hold on to the city for a week before being pushed away by Afghan security forces with support from the US troops is a matter of concern. It shows that the progress made in the last 14 years since the US-led NATO forces dethroned the then Taliban government can easily be thwarted. The security situation in the country is still fragile and it has worsened in some pockets. It is heartening that NATO, too, has decided not to withdraw its forces from Afghanistan following President Obama’s announcement.

In fact, a recent United Nations report has said that the security situation in Afghanistan remains volatile, as civilian casualties are on the rise and the peace process between the Afghan government and the Taliban is quite shaky. Despite some security gains last year, the UN recorded 22,051 security incidents in 2014, which surpassed those of 2013 by 10 percent. The United Nations Assistance Mission in Afghanistan has also expressed concern over the rise in civilian deaths in the South Asian nation. It documented over 10,000 civilian casualties in 2014, the highest annual number of civilian casualties recorded since the UN body began systematic monitoring in 2009.

The recent surge in violence is a cause for concern in the backdrop of looming Islamic State threat in Afghanistan. The principal security challenges from various insurgent groups remain. The Afghan Taliban, the Haqqani network, the armed faction of Hezb-e Islami Gulbuddin, Tehrik-e-Taliban Pakistan affiliates are all active and have not been defanged. Therefore, it would be naïve to imagine that Afghan forces can secure Afghanistan without outside help.

The decision by President Obama to keep at least 9,800 troops in the Central Asian nation through most of 2016, with at least 5,500 of them till the end of next year, must reassure Afghan leadership that the US is not walking away from the situation that remains uncertain.

But can the US afford to keep its forces forever? There is need to find a permanent solution. All stakeholders must ensure that Afghanistan is not used as safe haven for terrorists to launch attacks.

Here in comes the dubious role of Pakistan in the region which has been sheltering terrorists in its backyard. It is an open secret that Pakistan does not want a stable government in Afghanistan. In fact, Pakistan was one of the few countries to recognize the illegitimate rule of Taliban. Afghans are equally wary of Pakistan. Only recently did Afghan President Ashraf Ghani accuse Pakistan of wavering in its cooperation in the peace talks. It should be recalled that despite the first round of successful peace talks between the Afghan government and the Taliban which was hosted by Pakistan, there has not been any forward movement. Complexities have arisen since the announcement of the death of longtime leader Mullah Mohammed Omar. Taliban’s new leader Mullah Akhtar Mohammad Mansour does not command support of all the factions. The resurgence of Islamic State with backing from some factions of Taliban bodes ill for Afghanistan.

It is hard to believe that Pakistan will change its Afghan policy because both the military and civilian establishments consider the Taliban as an important ally in their scheme of things to counter Indian presence in Afghanistan. While India has been involved in rebuilding of Afghanistan, earning goodwill of the locals, Pakistan has been contributing to the country’s destruction by supporting the Taliban.

If President Obama does not want to bequeath Afghanistan war to his successor which he inherited from his predecessor, he should find meaningful and political ways to end the war. He should use his planned meeting with Pakistan Prime Minister Nawaz Sharif on October 22 by talking tough with him. Pakistan should be told in no uncertain terms that it can’t take the international community for a ride by pocketing billions of dollars in international aid and supporting the Taliban simultaneously. The ball is in the court of Pakistan.