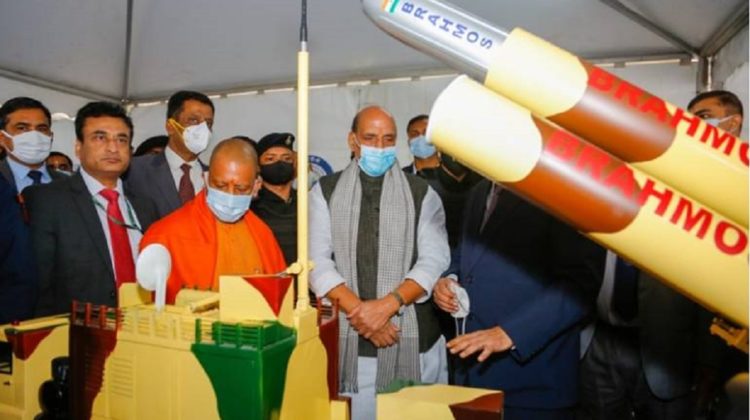 Raksha Mantri(RM) Shri Rajnath Singh laid the foundation stone of “ Defence Technology and Test Centre (DTTC)” and ”Brahmos Manufacturing Centre (BMC)” on 26 December, 2021 at a grand ceremony  in Lucknow, Uttar Pradesh( UP), in the presence of Chief Minister (CM) Yogi Adityanath, along with Union Minister for Housing and Urban Affairs Kamal Kishore, MPs and MLAs, MOD and DRDO officials.

The Defence Minister congratulated  Defence Research Organisation (DRDO) Head , Dr  G Satheesh Reddy and his team of scientists and engineers who created the facility. He said that this facility is a new concept which will provide a strong technological base to develop and test new and modified  defence products keeping in view new innovators  and start-ups. The RM added that it will fulfil creative energy, capabilities and aspirations of young talent of not only Uttar Pradesh but also pan India.

The facility will boost up the integration of Micro, Small and Medium Enterprises ( MSMEs) and introduce them to the field of Defence Production and Aerospace manufacturing.  DTTC will also provide excellent opportunity for direct and indirect employment through the skill development centre of the facility and be an important source of revenue generation.

Director DTTC stated that this unique facility is spread over 22 acres of prime land provided by Chief Minister Yogi Adityanath on priority basis with the aim to accelerate the industrial growth of the defence and aerospace manufacturing cluster in Uttar Pradesh Defence Industrial Corridor (UPDIC). It will consist of the following six sub centres 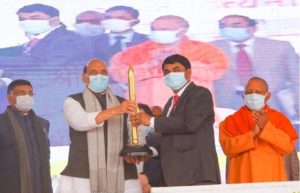 In his opening address, Dr G Satheesh G Reddy, Secretary Department of Defence Research and Development and Chairman DRDO said that the state-of-the-art DTTC is being established to implement the MoU exchanged between Uttar Pradesh Expressways Industrial Development Authority (UPEIDA) and DRDO during Def Expo2020 held at Lucknow in presence of RM and CM. He thanked CM, UP for providing  222 acres of precious land and clearance on all aspects on fast mode. He thanked PM and RM for providing funds  to establish the centres. He gave an assurance of total dedicated support to all defence and support industries in the industrial corridor.

The new facility will follow the design-build-test-learn cycle for technology consultancy and handholding of the Deep Tech Start-ups and industries. The DRDO chief emphasised that DTTC will facilitate industries by establishing a centralised modern technology infrastructure which will accelerate product development and reduce the induction time and turnaround time for futuristic systems development through its multi-sub centres. Thus, DTTC will act as a bridge for Industries and start ups to grasp the DRDO Intellectual Property Rights (IPRs), Patents, Terms of Trade (ToTs), copyrights. It will extend holistic support to Industries, start ups and academia of UPIDC. Consequently, it will support tremendous growth and progress of Industries and platform for Start ups. DTTC will ensure formidable step towards PMs dream project – Atmanirbhar Bharat.

Brahmos is a ram jet, medium range, supersonic, cruise missile  developed under Indo-Russian joint venture.  The name Brahmos has been derived from Brahmaputra River of India and Moskova River of Russia. It can be launched from land, ship, submarine and air mode. The missile is manufactured by Brahmos Aerospace Ltd which was established in12 February 1998. It was first test fired in 12 June 2001. Already, it is in service with Army, Air force and Navy. The corporate office is in New Delhi;  assembly and production facility are in Hyderabad and Thiruvanantapuram . The extended range Brahmos was test fired on 30 September 2020 and achieved range of 400 kms.

The Brahmos Manufacturing Centre (BMC) in Uttar Pradesh along with DTTC is the other facility being developed in UPIDC. The plant will be operational in two years. The plant will be spread over 200 acres and will manufacture a next generation version of Brahmos  called NG – 100 units per year. The missile will be mounted on SU 30 mk l , MIG  29, Tejas MK IA and Rafale fighter aircrafts and will act as a force multiplier,

Recalling Indian history Shri Rajnath Singh said that India does not believe in being an aggressor but will always be ready to defend our frontiers and people against any nation with hostile intentions. Brahmos NG facility will strengthen our Armed Forces and act as a reliable deterrent. Similarly, the advanced DTTC will be another milestone for DRDO, state of UP and Nation and open new avenues for talented Youth .

“Balasaya Mulam Vigyanam” the motto of DRDO means the source of strength of nation is science .

Prime Minister Narendra Modi has always followed the cherished the vision of late PM Atal Bihari Vajpayee of “Jai Vigayan.” He complimented DRDO for its yeoman contribution to National security and Defence