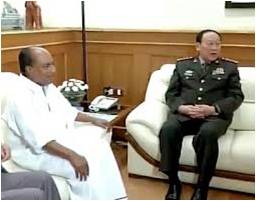 Defence Minister A K Antony held delegation level talks with his Chinese counterpart, General Liang Guanglie, at New Delhi on September, 04, 2012. In a significant breakthrough, the two countries decided to resume bilateral military exercises stalled in 2010 post the denial of visa to the then Northern Army Commander, Lt General B S Jaswal, by the Chinese. The two sides have also agreed upon high-level official exchanges and maritime security cooperation.

The leaders touched the situation in the South Asia and Asia Pacific region with specific reference to the US plans to enhance its presence in the Asia Pacific region. The sensitive issue of presence of Chinese troops in Pakistan Occupied Kashmir also came up for discussion as did the long standing border dispute.

A visit by the Chinese Defence Minister after a hiatus of eight years is indicative of the interest that China has in maintaining cordial military relations with India. A major reason behind this new found cordiality being exhibited by China is most likely the attempt to counter to the fast developing military relationship between India and America. The US determination to dominate the Pacific seas is also a motivating factor for China to look towards Indian for support.

This is the right time for India to assert its own security concerns in the most candid manner, the main amongst which would be Chinas continued support to Pakistan at a time when the latter country is fast becoming an international terrorist pariah. It is support from China which is providing to Pakistan the leverage to carry on with its terrorist activities and it is India which is suffering in the bargain, China needs to exhibit sensitivity to India’s genuine security concerns in this regard. There are, of course, many other issues but most important is Pakistan. It should, therefore, be presented to China as a fait accompli for any progress in the talks.

Overall the meeting was a step in the right direction since it is to the benefit of the two regional and growing powers, who are also neighbours, to play a positive role in the affairs of the Asian region in specific and the world in general.