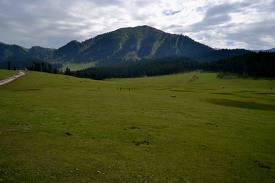 A professional military establishment like the Indian army needs to constantly hone its skills with rigorous training. An important aspect in this regard is weapon training whereby the soldiers are given practice in the use of their weapons. This facet has gained more importance in modern times since weapons are technologically advanced and remaining in constant touch with their use is most important. India has many field fire ranges covering hundreds of square kilometres where troops carry out their practice. The biggest and most prominent among these are the Pokhran and Mahajan ranges in Rajasthan and the Babina range in Uttar Pradesh.

Tosa Maidan is a meadow in the Budgam district of the Kashmir valley. As with all other locales in Kashmir its natural beauty is breathtaking. The area was leased out to the Indian army in 1964 for use as a firing range. The artillery units posted in the Kashmir valley use the range to calibrate their guns as do other units holding smaller calibre weapons. The need for a firing range in the Kashmir valley was dictated by the prohibitive cost and great effort required for transporting heavy equipment by road from the valley to the bigger ranges in Central India. The over taxed Jammu-Srinagar highway would not be able to take the load of such large military movement.

The lease of Tosa Maidan is due to expire. Very naturally the army is keen to extend the lease but as with every other civil-military matter in Kashmir, this matter is also being politicised. The locals are being pushed by lobbies inimical to the army to contest extension of the lease on grounds of inconvenience and danger to life and property. The few deaths that have taken place due to firing accidents are being quoted to press home the point.

While there is some merit in the argument put forward by those who are against extension of the lease, the issue needs to be seen in its entirety. One thing that is certain is that the requirement of training of the troops deployed in the valley cannot be wished away since heavy artillery equipment cannot be moved out of the valley for training purposes every year. Therefore, if not Tosa Maidan then some other area will have to be earmarked for this purpose. In Tosa Maidan the systems have evolved over the years, hence it comes across as the most appropriate option for the purpose.

Are the firing ranges at Tosa Maidan actually causing the kind of inconvenience that is being projected? The area being backward draws sustenance from the proximity of the army; does the State government have a concrete plan for sustenance of the people in case the army walks away? The issue now being hotly debated has not even been mentioned in political circles over the last five decades when the lease period was in place. Evidently, the people were not as fed up with the system as in being made out now. It was accepted as the legitimate requirement of armed forces and every one across the spectrum of social and political affiliation understood the needs. Is the demand genuinely coming from the people or is it the product of a few activists with active support from the media?

Much is being said about the huge tourism potential of Tosa Maidan that is not being exploited due to the presence of the Army and the firing ranges. There are so many places in Kashmir like the Lolab valley in Kupwara that are much more beautiful than Tosa Maidan, have these been developed as tourist destinations? For decades now the tourism circuit has remained unchanged in the Kashmir valley, what is available is also not being maintained so what additional effort can be expected in the near future? If not tourism than what is Tosa Maidan worth in terms of economic activity? The army is also undertaking a number of social uplifting and development initiatives to compensate for the inconvenience being caused to the people. At least now the locals are earning their keep from the presence of the army, if this also goes than what would be their fate?

Over the years fool proof procedures have been put in place to ensure that no casualties take place, the locals are informed well in advance by both the officials of the government and the army representatives themselves before the firing commences. It is further ensured that the range is clear of all human presence, only then does firing commence. It is for this reason that not a single casualty due to fire has been reported in Tosa Maidan, the few deaths that have occurred have been because of collection of residual material of shells that fetches a handsome price.

The argument of environmental degradation does not hold much merit because on ground it is the army that is stalling the process of deforestation by putting a stop to timber smuggling. This apart the Bakerwals are allowed to graze their stock in the area whenever there is a lull in the firing which helps in their sustenance. The invaluable biodiversity of the area is intact because of the presence of the army; this is a sterling contribution towards maintaining the ecological balance.

The future of Tosa Maidan should not be decided on the basis of some self centred politics. That the separatists will do everything to embarrass the army and cause inconvenience to the troops is well known; now even the mainstream seems to be looking at some personal political gains in the election year. Any decision made under such circumstances cannot be deemed to be in the interest of the people. The government needs to come up with a consolidated plan to meet the tactical requirements of the army as also for rehabilitation of the extremely poor people of the region before any decision to change the status quo is taken.