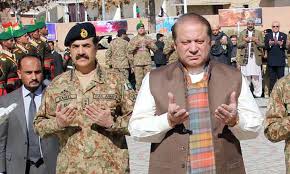 Pakistan is today grappling with a fast deteriorating security situation. The much acclaimed offensive against the militants, Operation Zarb-e-Azb, is going nowhere. In fact, the Pakistan Taliban seems to be gaining strength as is evident from its claim of having shot down a military helicopter in Gilgit-Baltistan leading to the unfortunate death of seven people including two envoys of foreign countries.

Ironically, the internal problems in Pakistan are not leading to a letdown in its Proxy war against India. Admittedly, there has been a down slide due to the preoccupation of Pakistan army and the Inter Services Intelligence (ISI) towards the western border of the country and the internal problems, but the system and infrastructure directed against India is very much in place. It is being opined by all strategic circles that militant engagement with India will gain momentum once the US and ISAF forces exit from Afghanistan.

Within India, the security situation has got enmeshed into a predictable groove for quite some time now. A minimum level of infiltration of terrorists into Jammu and Kashmir has been maintained by Pakistan based terrorist organisations. The number being eliminated through counter-terrorist operations is roughly equal to the number that successfully infiltrates every year. The fencing and other counter infiltration measures that India has adopted have made infiltration very difficult but 100 percent blockade is not feasible in view of the large area and difficult terrain involved. The end result is that the number of terrorists operating in the state has been hovering at 200 to 300 for a long time.

The internal debate in India is also stuck on politicisation of the security paradigm by endless demands of revocation of security enabling legislations like Armed Forces Special Powers Act 9(AFSPA) and Disturbed Area Act etc. Such demands are being made by a segment of the political leadership in power in Kashmir without taking necessary steps to find alternatives. Nothing is being gained by this rhetoric except for lowering of morale of the security forces and creation of trust deficit between them and the state government.

The resultant situation of status quo is in Pakistan’s interest since it meets the objective of keeping India engaged in a low cost, high dividend conflict. For this very reason it becomes necessary for the Indian establishment to shake off the lethargy and break the status quo.

Lack of a credible reaction by India is building on Pakistan’s confidence to extend its operations. It is now looking at encircling India by establishing base in neighbouring countries like Nepal, Bangladesh and Sri Lanka and instigating other disaffected groups like Maoists, SIMI, Indian Mujahideen etc.

India has two credible options to contain the evil, immoral designs of Pakistan. The first is to take the fight into Pakistan territory by creating a similar type of disaffection over there; the second is to deny the space and the opportunity within India that Pakistan is looking for.

India cannot add much to the already terrible internal situation in Pakistan. The country is already on the verge of breaking down under the weight of its own contradictions. In fact, a fractured, unstable Pakistan where large swathes of territory is in the hands of religious fundamentalists and the rest is immersed in chaos and anarchy is a bigger nightmare for India than the existing situation.

It is, therefore, crucial to follow the second option of denying Pakistan the means to create disruption and disaffection in India. Such an effort can be supplemented by a proactive diplomatic initiative of exposing the malevolent intentions of the country.

The first step has to be taken by those who speak the loudest against the security model in the state. Chief Minister Mufti Mohammad Sayeed should concentrate all his energy and resources towards creating a local force that is capable of looking after internal security without the help of the Army. JK Police would need highly trained armed police battalions to carry out precision attacks against terrorists. This would require time, effort and above all money. Only when such a force is firmly established should there be any talk of removal of the Disturbed area Act and the AFSPA.

There is a catch here, Mufti should also realise that the moment such a force becomes operational he will be directly in the eye of the storm so far as allegations of human rights violations are concerned. Those who are out to cause disruption are not going to leave their agenda simply because an indigenous force has taken on internal security. In fact, they will increase the level of their agitation to weaken the local leadership.

At the national level the central government needs to launch a well coordinated and credible information campaign to expose the evil designs of Pakistan to the international community. It is very difficult and expensive for the media to cover the remote areas of the state where terrorist atrocity, cross border firing and infiltration are causing a lot of harm. The government needs to facilitate coverage in such areas.  The information also needs to be disseminated through diplomatic means.

India also needs to take on the gross colonization and exploitation of the dispute territory of Pakistan Occupied Kashmir and Gilgit-Baltistan by both Pakistan and China.  India has a right to do whatever possible to protect its citizens withering under foreign occupation and the country should not shy away from doing so. Extending moral support to the insurgency afflicted areas of Pakistan like Balochistan, FATA, North and South Waziristan is also an ethical responsibility for India.

The bottom line is that Pakistan will exploit all weak spots in India to occupy more and more space in pursuance of its proxy war. It is up to India to come up with some dynamic, out of the box solutions to meet this challenge. The sooner India brings in some forceful energy in its dealing with Pakistan the better.