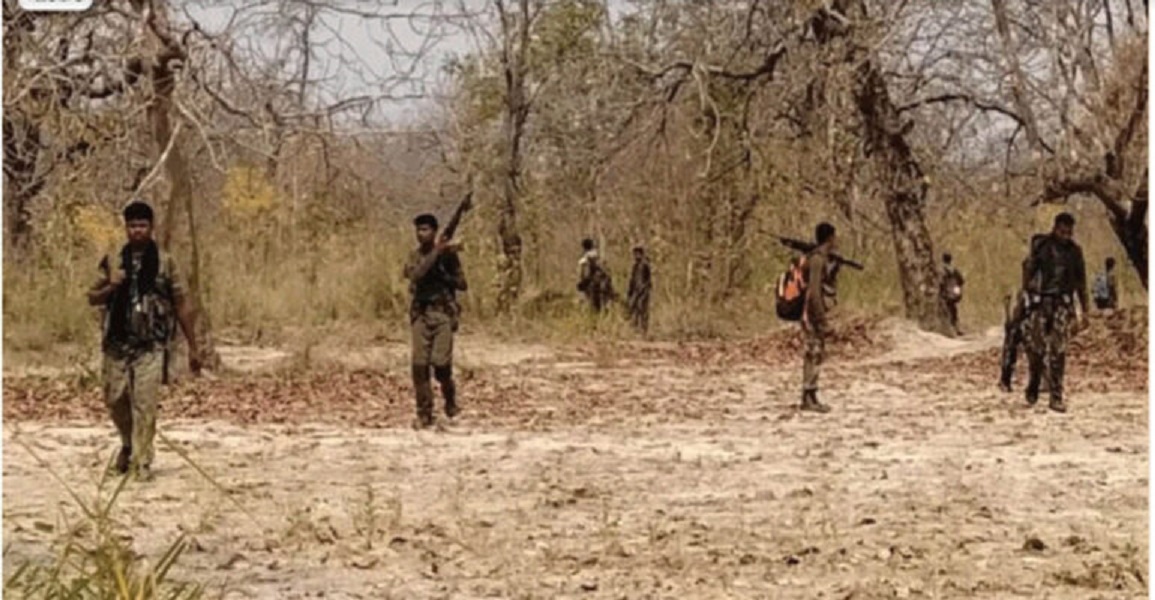 Operation Prahar was in progress on 03 April 2021 since 0530h in thick jungle area between Bijapur and Sukma village. It was being led by a special Cobra unit (commando battalion). Central Reserve Police Force ( CRPF) Bastaria battalion, along with Special Task Force (STF) and District Reserve Guard (DRG) of Chattishgarh state police were a part of the operation. The force of approximately 2000 troops, subdivided into five columns of 400 each, launched search and destroy missions from five launch pads namely Tarren, Usroor, Pamed, Minpa and Narsapuram with an aim to destroy underground camps of No 1 battalion of People Liberation Guerrilla Army (PLGA) led by  Maoist Commander Madvi Hidma.

At 1200 h, as the leading scouts of the Terren column was approaching Village Tekulguda, they were fired upon from three sides. The troops fired back but heavy automatic fire and mortar bombs rained on them. They were trapped in the killing ground. Those who rushed for cover in nearby huts, were attacked by reseve party who stabbed them and cut off their limbs. The command and control was lost. There were approximately 300/400 Naxals fighting the battle who knew the terrain and were seasoned in jungle warfare. The stunned column commander asked for reinforcement.

The ambush lasted for two hours after which Naxals withdrew, taking with them seven AK 47 Rifles, two 5.56mm INSAS Rifles, and one Light machinegun (LMG).  23 security forces troops were killed ruthlessly, one was missing and 33 severely injured with gunshot and axe wounds .

On 4 April, at dawn, an intensive search was carried out by a reinforced rescue team and the dead/wounded were collected at an ad-hoc helipad near Village Tekalguda. They were evacuated by three IAF MI 17 helicopters to Raipur/Jagdalpur civil hospital.  The Naxalites also suffered some casualties but only one dead body of a woman Naxal was recovered. It was the deadliest ambush in Bastar region after Dantewada ambush of 6 April 2010 in which 76 CRPF personnel were martyred.

Naxalism, a militant extreme leftist organisation, originated in 1967 when poor and harassed peasants revolted against atrocities of rich landlords in village Naxalbari in Siliguri subdivision of Darjeeling, West Bengal. Communist Party of India (CPI) that had come into existence in 1926, was split into two factions in 1964 – CPI (pro-Chinese) and CPM (Marxist) pro-Soviet.  Two years later, in1966 another split gave birth to a new pro-Mao faction named CPML (Marxist Leninist) . With time, Naxals spread their wings in 108 districts of 11 states covering Nepal, Bengal, Jharkhand, Chhatisgarh, UP, Madhya Pradesh, Odisha, Andhra Pradesh, Telangana, Karnataka, Tamil Nadu and GadchaIroli district of Maharastra, this came to be known as the Red Corridor.

Charu Mazumdar was the chief architect of the Naxal movement; Kanu Sanyal and Jangal Sanyal were his chief field commanders. On 18 May 1967, Siliguri Kissan Sabha led by Jangal Sanyal declared support for armed struggle as suggested by Charu and Kanu Sanyal. There was a dispute between landlords and tenants on 20 May. The police party which came to arrest tenants on complaint of landlords was ambushed and hacked to death and thus the violence commenced.

In 1971, when CPM joined Congress to form a coalition government in the state, the movement received a rude jolt. The next year, Charu who was arrested; he died during interrogation in Alipore jail. The movement was fragmented to a great extent but it continued.

In July 1971, a joint operation by Army, Paramilitary and Police was launched against Naxalites in the Red Corridor. Hundreds of insurgents were killed and approximately 20,000 including top leaders were imprisoned. The operation was not disclosed to the media. It was prematurely terminated as war clouds came up in the horizon.  The Naxal movement thus received a breathing space and it resurfaced.

In 2009, the central govt undertook an Integrated Action Plan (IAP). It had two prongs of economic development at grass root level to generate good will and combating insurgency in a coordinated manner by incorporating all central and state govt forces and intelligence agencies. Casualties to Security Forces (SF) in counter-insurgent operations, however, continued. On 15 February 2010, a SF camp was raided in West Bengal in which 25 policemen were killed. On 6 April, 2010, 76 CRPF personnel were ambushed in Dantewada;  there were other operations in which both SF and the Naxals suffered casualties.

Due to coordinated effort, the Red Corridor started thinning and in 2011, the affected districts were reduced to 83 and UP and Karnataka were removed from the list. The present status is that the Naxals operate in 60 districts of 8 States – West Bengal (8), Jharkhand(14), Bihar (5), Chhattisgarh (10), Andhra Pradesh (8), Madhya Pradesh (8), Odhisa (5) and Maharashtra (2). Chhattisgarh remains the epicentre of the conflict between Maoists and SFs.

Counter-insurgent operations are continuing.  on 25 May 2013 a Congress rally was attacked in Sukma, Bastar where 29 people were killed including senior leaders Mahendra Karma, Nand Kumar and former CM Vidhyacharan Shukla; on 29 June 2015 police personnel were hacked at Sukma. The list is very long and brutal.

The year 2020 remained incident free. On 23 Mar 2021, Maoists blew up a bus carrying District Reserve Guards killing five and severely injuring 13 police personnel at Narayanpur district of Chhattisgarh. The latest is the ambush on 3 April at village Talukguda; PLGA is still striking terror in Dandakaryna corridor.

Red corridor areas, especially in West Bengal, Jharkhand and Chhatisgrh  are rich in minerals. Coal is in abundance . There are a number of big multinationals operating in this area. Heavy extortion in the name of protection is the order of the day. It has been estimated the insurgents extort INR 14 billion per year in the corridor from corporate and rich landlords. Food grains are purchased from locals to maintain a Robin Hood image. Police/SF informers are executed ruthlessly. Molestation is not permitted. Public courts are held by local commanders and immediate justice is delivered. The insurgents intelligence network is excellent and all strength and movements of SF is immediately reported. Fear is key to control poor peasantry.

The question that arises is – How long will India be bled by this foreign sponsored menace? how long will our troops suffer? Various governments of 11 states, over the last 54 years, have failed to solve the chronic menace. Central government has merely given lip service. It remains a smoking volcano from where red hot lava may burst any day.

The causes behind heavy casualties of SF are many. CAPF troops are not well trained for counter-insurgency operations. Faulty planning , lack of motivation in leadership,  lethargy,  delay in movement of reserves, lack of coordination all lead to poor operational response that is exploited by the well trained and motivated insurgents.

While speaking about the latest incident a former DGP, Prakash Singh, said that there was total intelligence failure as the  movement of 300 Naxals could not be detected. He felt the will to fight and mental robustness was lacking and that the entire sad episode was a result of a command failure. A group of officers who have never been on ground planned this operation. Worse, they never consulted local commanders.

A macro level multi prong strategy is required to neutralise the fear syndrome created by the Maoists. The infrastructure development has to completed in rapid mode. The peasants must be given ownership of land through fast land reforms. Economic development till grass root level should be restored. Schools and hospitals should be established and governance infrastructure provided up to the block level. Insurgents should be given incentive to join the mainstream by recruiting them in police/ PMF. Strong local intelligence network based on surrendered/ apprehended cadre should be put in place. India has a new breed of pseudo intellectual and social activist coined as urban Naxals, who operate under a veil and are, like termites, more dangerous than rural Naxals, They need to be watched and exposed.

(The author is a security analyst and columnist)