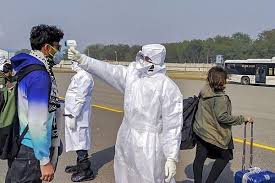 COVID 19, also known as Corona Virus, is an infectious disease of recent origin that causes respiratory problems. There is no prescribed treatment of vaccine for the disease. While most infected persons are likely to recover within in about 20 days time, old people and children as also problems like cardiovascular, diabetes and chronic respiratory problems, are more likely to develop serious illness even leading to death
The virus originated from China and spread to 180 countries across world; it has been declared a Pandemic by the World Health Organisation (WHO). The severity of this pandemic can be gauged from the fact that as on date, nearly 1,42,294 people have tested positive while 61,239 have succumbed due to this fatal disease. Most affected countries are Spain, Italy, China, Iran and United States of America where death toll is very high.
India also faces wrath of corona virus which has till now claimed 86 lives, and the number of people testing positive is surging with every passing day. The newly created Union territories of Jammu and Kashmir as well as Ladakh too have recorded more than 106 positive cases and recorded two fatalities.
Pakistan is also in the throes of the infection which is spreading at a very fast pace over there. China is Pakistan’s “all weather friend” and has strong diplomatic and business relations with it. CPEC is a huge joint venture between the two in which thousands of Chinese employees are working inside Pakistan. These technicians and labourers keep making frequent trips to their country for meeting their families or for some job-related work. Since China has been one of the most severely corona virus hit countries, it’s but natural that the massive workforce working on CPEC projects would have brought along this virus while returning from mainland China. Since Pakistan did not go in for the ‘lockdown’ option like India, there is just no possibility that locals in Pakistan administered Kashmir (PaK) and Gilgit-Baltistan (GB) could have saved themselves from contracting corona virus.
The Pakistan army has set up quarantine camps in PaK and GB but it has done so only after corona virus pandemic has spread all over. To make matters worse, Pakistan army have shifted positive cases of corona virus infection to PaK due to which this pandemic is likely to go out of control. The locals have expressed their unhappiness by coming out on the streets and protesting. In any case, since the idea of shifting positive corona virus cases into PaK is that of the Pakistan Army and not the Imran Khan government, no amount of objection will make the army reverse its decision!
There are very reliable reports that Pakistan Army has already starting moving positive cases of corona virus into PaK and due to excessive patients and limited facilities, the overall situation there is not very good. This becomes a matter of very serious concern for the people of Kashmir because the corona virus will also infect militants staying in launch pads situated inside PaK and when they infiltrate across the LoC and enter Kashmir, they will bring this virus into the valley with them.
Thus, while on the one hand Imran Khan is expressing concern about Corona Virus spreading in Kashmir and even asking UN and global community to intervene, the Pakistan Army is hell-bent on sending Corona Infected militants into Kashmir and further aggravating the problems here!
The fear of corona virus infection reaching us from across the LoC isn’t hypothetical, it’s real. Just two days ago, the army thwarted an infiltration bid by killing five militants on the LoC in the Kupwara sector of Kashmir. Such men are likely to be active carriers of the Virus that remains dormant in healthy people but is prevalent all the same.
What makes infection being spread by militants even more worrisome is that in order to avoid being identified by security forces, militants will not go to hospitals for check-ups and if they get infected, they cannot be kept in isolation and under medical supervision. Thus, even if one militant gets corona virus, he will not only infect his comrades but also the people he comes in contact with and this transmission of the virus will continue till he is alive.
The US will soon begin the process to withdraw the troops from Afghanistan and the pulling out of soldiers will have direct implications in the Valley since the spillover of militants will feel emboldened to cross over on the eastern border. This is worrisome for both for government of India as well as for the people of Kashmir.
Luckily, the Indian army is seized with this problem and has enhanced vigil along the LoC so that infiltrators are not able to infiltrate and enter Kashmir but the danger persists. The Indian Army has also launched a multi-pronged campaign to reach out to people in remote, rural and urban areas of Jammu and Kashmir and educate and assist them in the fight against Corona Virus. As part of the campaign titled “Jointly we will put an end to Corona”, distribution of pamphlets, masks, sanitizers and also ration is being done besides installation of hand wash facilities. The gesture of Army was very well received and appreciated by the local populace,
The world is in the receiving end of the biggest challenge of the century as posed by the COVID 19 Virus. Ultimately, human spirit will prevail and things will get back to normal. When that happens, it is the manner in which people helped each other that will be remembered. India is putting up a valiant fight, which has resulted in the lowest numbers of deaths in this highly populous country. The spirit being exhibited in Jammu and Kashmir and Ladakh by the people that emulates the spirit of India. Under these testing circumstance a well conceived political outreach and empowerment of the civil society aided and abetted by the central Government is necessary.

(Author is a Kashmir based senior journalist and Political analyst)