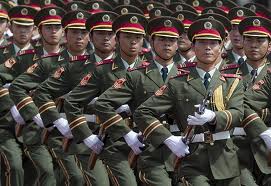 Prime Minister Manmohan Singh has recently remarked at a press conference that India should be prepared to deal with the new Chinese “assertiveness”. While doing so he was probably referring to the Chinese `String of Pearls’ policy, which security experts feel, could choke India in the near future. One would not want to accuse the Prime minister of being alarmist. However, when the normally unruffled `Doctor of Economics’ spoke disquietingly of `paying close attention to global powers exercising influence in the Indian Ocean Region’, it was assumed that he was genuinely concerned about China’s growing role. When again, some days later, he spoke to editors about his concerns on China the assumption was sealed for good!

Today, even the US is wary of the Red Dragon’s growing military capabilities and the opaqueness surrounding its new long–term intentions. This emerged after the visiting Pacific Command Chief, Admiral Robert F Willard held a flurry of meetings with the Indian National Security Advisor, the Foreign and Defence Secretaries, and of course the three Service Chiefs, all in a day! Clearly, the US were concerned, and it came out in the press conference, wherein Admiral Willard admitted that both India and the US “need to work with China”, and engage with the 2.25 million strong Peoples Liberation Army.

India’s growing concerns have recently risen from two incidents. First, Beijing’s arbitrary decision to deny a the Commander of the Indian Army’s Northern Command, General BS Jaswal, an official visit to the country on the premise that his command includes a disputed region. Second, the reports of the Chinese Army having sent approximately 11,000 soldiers in Gilgit-Baltistan, ostensibly to dig tunnels and help in flood relief, but actually to colonise the area and at the same time pose a direct threat to India across the line of control. Diplomats on both sides are now claiming that the issue of the visit of the Army Commander has been resolved amicable. There is also an attempt to push the reported build-up in Pakistan Occupied Kashmir under the carpet by not contesting the aggressive denial by both Beijing and Islamabad who are insisting that the Chinese troops are there to help contain flood damage and the impending threat of the Hunza dam overflowing, as also to work on the Karakoram Highway project. India’s suspicions that China’s Army is now securing its land route to the Arabian sea via Pakistan Occupied Kashmir have nonetheless grown, given that China has also wrested control of the Gwadar port back from the Singaporean Port Authority.

These developments are meshed with the fear of India being chocked by a `strategic string of pearls’ – a US Defence department term for China’s ambitions for bases in the Indian Ocean Region (IOR) with Gwadar in Pakistan, Hambantota in Sri Lanka, Chittagong in Bangladesh, and the Sittwe port in Myanmar as the mainstays of the policy. It now seems that the string is slowly turning into a choke-chain for India. At one level, the fears of China overrunning the entire region, especially Pakistan, and thus open its front with India may seem far-fetched, even hysterical. At another it may be a much needed wake up call for us to reassess our preparedness to counter the `increasingly assertive Chinese military’. In all cases New Delhi’s alarm can be deemed to be constructive, if nothing else, it will ensure that India takes a closer look at its own role in the region, and possibly try to find answers as to why China is making headway with so many of our neighbours.

Before evolving ways and means to address the Prime Ministers concern we need to take a harder look at our own policies and find new ways to win neighbours and increase influence in the region’s growth story. Take Sri Lanka for instance, our land-locked and culturally affiliated neighbour has many reasons to welcome Indian investment. Whether it was the tsunami, the war against the LTTE, or the post war demining and rehabilitation effort, Indian agencies have been at the forefront to help. And yet, as Sri Lanka recasts itself as the Singapore of the region, it is China that is its biggest infrastructural investor, bagging many coveted projects, given China’s deeper pockets!!

Much of this is a result of the classical Indian apathy. The Hambantota port, for example, was offered to India first. New Delhi’s lack of interest in developing this strategically located harbour was easily the gain of the Chinese who worked double time to complete the project (With $60 billion funded from China’s Exim bank). Not only the port, a city centre, an airport, a stadium and a massive convention centre were also built. Indian strategists now worry that Hambantota’s future could include a Chinese naval base too!

Another contract for the Colombo port has just gone to a Chinese consortium, no Indian company having even tried to bid for it. Given that the NTPC Sampur coal 500-MW plant is already delayed years beyond its 2011 deadline, it is hoped that other projects in Sri Lanka that India has committed itself to, (including the northern rail line, the Palaly airport and the Jaffna stadium), will be dealt with more expeditiously. While many in India would see these projects essentially as aid to a needy neighbour, it is time to invert the prism and see them as ways of increasing our footprint and extending our ambitions to a sphere of influence well beyond our land mass.

Thankfully, China’s attempts to acquire a permanent presence in the IOR are constrained by the US presence which constitutes the most formidable naval armada ever assembled in world history. To add to its discomforts, American submarines and aircraft carriers regularly patrol in close proximity to China’s eastern seaboard, making it’s notions as a an Indian Ocean power a distant aspiration.

Though China continues its pinpricks, like objecting to the Indian Prime Minister visiting Arunachal Pradesh, which it has provocatively started calling South Tibet, or, deliberately intruding into Indian territory as was seen in the more than 200 patrols that `involuntarily’ ventured into Indian territory over the last year, it knows that , the greater challenge lies in containing India’s growing march towards economic and industrial might, which indirectly threatens its own growth. This is the reason behind the predominantly business bias of the Chinese Prime Ministers recent visit to India. Though diplomats on both sides continue to assert that there’s enough in the region for both the Asian giants to grow independently, without intruding into each other’s territory, the fact remains that China’s efforts at `choking’ us continue unabated.