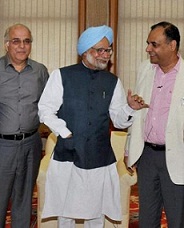 Prime Minister Manmohan Singh has stated that China is “far ahead” in its military strength but India is catching up with its limited resources. “The Chinese are far ahead of us. They are building a blue water navy also. Aircraft carriers – they are acquiring,” said Manmohan Singh in his recently held media interaction with a group of editors. With respect to modernisation of India armed forces he said. “We have started the process. We are looking at the modernisation of our armed forces, including the navy and the air force. For the first time in many many years, we have added two divisions to our army,” he said. “So within the limits of our resources, – we are doing – much advanced air fields in the border areas. We are trying to strengthen the border roads. Also to see, that states on our border – our villagers have access to electricity using solar power. The effort is on,” said the Prime Minister. While making all of these positive comments on defence capability he also admitted that defence expenditure as a percentage of the GDP has been falling from year to year.

The defence capability being built by China, its belligerence with respect to the border issue, its open support to Pakistan and its ingress into the disputed Northern Areas presently in the control of Pakistan are security issues to which India has to pay maximum attention. The economic success story of our developing nation will meet a rather abrupt halt in case the Prime Minister’s assurances amount to only lip service. Presently, there is not much to be happy about with respect to the equipment profile of our Armed Forces. There are huge gaps which need to be urgently capped and the process to do so is slow and lethargic. By the time a capability is built, it has already become outdated. It is time to cut the assurances and take affirmative action.