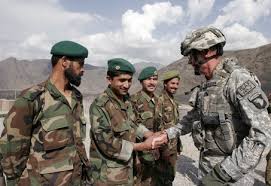 It has been 15 years since the US-led NATO forces landed in Afghanistan and ousted the Taliban from power, but the situation in the war-torn country is as fragile as it was then.  The western powers are now desperate to leave. But they can’t!  The US’ frustration is writ large as it seeks an early dialogue between Afghanistan government and the very Taliban forces which it ousted. But the Taliban won’t play ball.  In fact, the US-led forces are in for a rude and harsh summer.  The US had banked on Pakistan to cajole the Taliban leadership to come to the negotiating table. But that is not going to happen, at least, very soon.

Since the withdrawal of the bulk of the international troops, the Taliban have notched up considerable gains. It has widened its control to nearly one third of Afghanistan. And with just 13,000 largely non-combatant international troops, the powerful Taliban know that they can easily test and overrun Afghan security forces. The brief capture of the strategic northern city of Kunduz last year was a major embarrassment for the Afghan security forces. They could reclaim the territory only after the US carried out major air strikes. Since then, the Taliban have opened several fronts from Helmand in the south to Jowzjan province in the north, inflicting heavy casualties on Afghan security forces.

Afghanistan is proving to be a political liability for the US. If it stays longer, it faces strong backlash back home and if it withdraws, the country will fall to the Taliban.  It’s a classical case of entering a blind alley but not knowing how to come out of it. Whatever may be its political designs, the US has been sucked badly into a country where exit routes are not easy and not too many.

The US has only two options — either to go in for a full-scale war to annihilate the Taliban or to find a solution through political means. The US has already exercised its first option and the result is for everybody to see. Already the US has lost 2,300 of its men. And it has cost the US more than 110 billion dollars since its forces first landed in Afghanistan in October 2001. Other than dislodging the Taliban government, the US has not achieved anything other than propping up a weak government as a prized trophy. In fact, the situation is becoming more alarming now.

The UN Assistance Mission in Afghanistan has claimed that there has been a four percent rise in civilian casualties in 2015 compared to the previous year after the withdrawal of most international troops. At least 3,545 noncombatants died and another 7,457 were injured in fighting last year. Thirty-seven percent of the civilian casualties were caused due to ground engagements whereas another 21 percent people were either killed or injured during roadside bombings. Suicide attacks led to 17 percent civilian casualties. There was a sharp spike of 28 percent casualties to pro-government security forces in last year. And most of the casualties happened in Kunduz and Helmand provinces where the Taliban engaged Afghan security forces. According to the UN, there have been 59,000 civilian deaths and injuries since 2009.

Desperate to leave the killing fields of Afghanistan, which is increasingly becoming a graveyard for its forces, the US has fallen back on Pakistan to influence the Taliban to rejoin the peace talks. By doing so, the US has not only realized its folly but has admitted its defeat. Interestingly, Pakistan, which claims to have “considerable influence” over the Taliban after its admission of playing host to them, has been snubbed by the militant group. Early this month, Pakistan’s adviser for foreign affairs Sartaj Aziz made a 180-degree turn by admitting that it can influence the Taliban because its leaders live in the country. This is what the Afghanistan leadership has been crying for the last so many years that the Afghan Taliban enjoys safe sanctuaries in Pakistan, a charge the latter had been denying and the US supposedly believing it. Aziz also claimed credit for pressuring Afghan Taliban leaders to participate in the first direct face-to-face talks with Kabul last year.

But Pakistan has been left embarrassed by the Taliban who have refused to take part in the peace talks. It has set some pre-conditions, hard to be accepted by the western forces, before joining the dialogue. It wants occupation of Afghanistan to end and release of innocent prisoners.  The Taliban has intentionally put tough conditions, knowing well that they will not be met, because the militia is itself in disarray after the announcement of the death of its founder Mullah Mohammed Omar.  Mullah Akhtar Mansour, who has taken over the reign since Omar’s death, is himself battling infighting as several groups are not only opposed to his leadership, but to talks, as well.  Another major hurdle is that there is no Taliban as such. There are several splinter groups which operate separately. Even if some groups may be interested in joining the negotiating table at some stage, there would certainly be some others who would not, and they would continue to wage an armed struggle. The other rival group, headed by Mullah Mohammad Rasoul, and opposed to the leadership of Mansour, has rejected the peace offer. In fact, the two groups have been fighting between themselves for supremacy.

There are no easy solutions to the crisis muddled by several powers. Afghanistan views Pakistan with suspicion as it is convinced of its role in fomenting trouble and creating instability there. Pakistan’s recent admission of hosting the Taliban leadership confirms Afghanistan’s fears that its neighbour has been planning and launching attacks from its soil. Pakistan pleases the US leadership by launching on-and-off operations against Taliban forces in its territory, which are inimical to the western interests in Afghanistan.

Why Afghanistan will continue to bleed is that nobody is interested in finding a reasonable solution. Half of the problem can be solved if Pakistan either launches a major offensive against the Taliban sheltered in its territory or drives them away to Afghanistan. But can Pakistan afford to do it? Pakistan risks inviting trouble for itself if it turns against the Taliban! Therefore, it has no option but to play cat and mouse game in Afghanistan.

The US has a limited role as far as pushing Pakistan is concerned. Pakistan was a major conduit between the US and the Mujahedeen in driving away Soviet forces from Afghanistan. Today, the Taliban has become Frankenstein’s own monster. Its checkmate for the US in Afghanistan!

(Vikas Khanna is a senior Delhi based journalist and columnist)