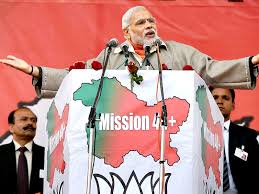 When the Bhartiya Janata Party (BJP) announced its “Mission 44” it confronted amused disdain from the Kashmiri separatists as well as local mainstream parties. Prime Minister Narendra Modi was not deterred; he addressed issues of the state with great determination and resolve. Pakistan was given a severe beating for its transgression along the line of control and the international border; it was also made clear to the neighbouring country that the duplicity of nurturing anti-national elements in J&K and simultaneously hankering for talks will not work anymore. Then came the floods in which the BJP and its sister organisations alongside the central government put in a herculean effort which was monitored personally by the Prime Minister. The state government, the local mainstream parties and the separatists, on the other hand, were conspicuous by their absence.  The resultant goodwill raised the hackles of the feudals in Kashmir who realised that the BJP challenge was very real and very potent.

The vested interests in Kashmir responded to the threat in the manner that they know best – with disruption and deceit. A considerable boost to the nefarious designs was given by such Kashmiris who are associated with the Pakistan based terror mongers. They gave calls for election boycott and engineered other disruptive activities like strikes and lockouts at the behest of their masters in Pakistan.

As the voting began, the euphoria caused by a large voter turnout rattled the terrorists and they responded with a spate of attacks.  The suicide attack in Arnia, district Jammu on November, 27, followed by the second suicide attack at Uri  in  Kashmir  on December, 05; the infiltration bid in Kupwara, Kashmir on December, 02,  and various other terrorist activities were initiated.

Another notable point is the manner in which the points for terror strikes were selected. Terrorist struck in all three regions of Kashmir – North (Baramulla), Central (Soura) and South (Pulwama) and also in Jammu. The terror masters attempted to send two messages. One, they can strike at a time of their choosing. Two, they can strike at a place of their choosing. The game plan was also coordinated with Prime Minster Narendra Modi’s rally at the Sher-e-Kashmir stadium in Srinagar on December, 8, which indicates that their political strategy goes beyond the elections.

The terrorists were in for a great shock. The security forces in Jammu and Kashmir had appreciated a spike in infiltration and terrorist activity during the period of elections and were fully prepared for the onslaught when it came. Despite the unfortunate loss of life and injuries suffered by the security forces, the terrorists could not strike at the civilian population as they intended to and they lost the complete cadre that they had infiltrated with great difficulty.

A day before the Prime Minister’s rally in Kashmir, a rumour was floated that it had been cancelled. This was a last ditch effort to reduce the turnout and somehow lessen the impact. The rally was not only held, it was well attended with a positive response from the locals to the Prime Minister’s call for development as the mainstay for uplifting the deprived people of the region. Polling the next day witnessed a record 58 percent turnout; it was less than the previous two outings but a record nevertheless since the separatist bastions of Sopore, Tral and Baramulla went for polling.  These areas, where the boycott call is the traditionally most effective, also registered a record voter turnout when compared to the previous elections. Uri, which had witnessed a suicide attack a few days back, responded with an all time record voter turnout of 79 percent.

The socio-political environment in Jammu and Kashmir (J&K) is witnessing a historic and dynamic change for the better. The high voter turnout in the first three phases of the election has set the pace for the inevitable change.  Democracy and freedom with development as the foundation is set to replace six decades of obdurate, dynastic politics marked by self confessed “feudal fiefs” and politics of opportunism.

The bottom line is that the Kashmiri people have moved on from the situation of the 1980’s and 1990’s. They are fed up of the violence and they look forward to a secure life and good jobs for their younger generations. Security forces are dominating the security environment and terrorists are merely clutching at straws. Regrettably, there are some in Kashmir who are unable to read the writing on the wall and are not ready to move with the times.

Prime Minister Narendra Modi has set the pace and has no intention of looking back. Pakistan will have to relent from its evil designs or stay isolated. Politics of disruption will be replaced by development in the entire state come what may.

The whole of India has mourned the death of the soldiers and policemen, brave sons of the nation, in this mindless violence. Many of those who died were sole bread winners of their families. Apart from their wives and children they also looked after their old parents and their younger brothers and sisters.  The trauma that their sudden and untimely demise would have caused to their families is unimaginable. One can only take solace from the fact that their sacrifice will not be in vain; it will herald a new era for the people of Jammu and Kashmir who have suffered immeasurably for decades on end.