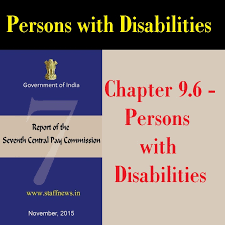 The armed forces are upset with the 7th Central Pay Commission (CPC) for relying upon inadequate and selective data to arrive at inaccurate and skewed analysis on the issue of disability pension for its personnel.

Defence forces had sought removal of the Neither Attributable Nor Aggravated (NANA) clause applicable to its personnel. On the basis of this highly controversial clause a soldier is denied disability element in his pension if the injury sustained by an individual is declared NANA by service conditions. This holds good even in cases of sustaining severe injuries on account of which an individual may get invalided out of service.

A person thus invalidated and placed under the category of NANA is denied the benefit of any kind of pension if he has less than 10 years of service.  In case he has service more than 10 years then he is granted pension but denied the disability award.

A civilian/paramilitary personnel, on the other hand, on sustaining similar injury, enjoys the benefit of completing his full prescribed length of service and that too with complete in-service benefits, including disability benefits. This is on account of civilian/paramilitary employees being brought under “The Persons with Disability Act, 1995”. Armed forces personnel are exempted from the provisions of this Act. This leads to a situation which is hugely unfavourable to defence personnel vis-a-vis his civilian/paramilitary counterpart.

It is only for the armed forces that the 7th CPC has sought abolition of the “percentage based” disability pension and instead sought to restore a “slab based system” which, it feels, is more equitable. The rationale of only singling out the armed forces and retaining the percentage based computation of the disability pension for paramilitary personnel and government employees is indeed incomprehensible.

The commission has based its recommendation on a premise that there has been an increase in disability pension cases within the defence forces. To reach to this conclusion it has has relied on data provided by the Comptroller General of Defence Accounts (CGDA). Such data can hardly be considered to be accurate.

If at all there has been an increase in the number of disabled soldiers, then the rising disabilities and stress levels and the need to improve health should have been a cause of concern rather than concluding that more personnel are receiving benefits. The data provided to the 7th CPC by the CGDA also could be incorrect in the sense that they may have included in it past cases illegally denied disability benefits but later granted the same by the intervention of the Court /Tribunal or due to change in policy.

It is also a well recorded fact that life expectancy of soldiers is lower than that of the general population, which itself points to need of sensitivity towards the health profile of the men and women in uniform.

While governments the world over are liberal in granting disability benefits to their disabled soldiers, both in injury as well as disease cases, the pay commission of India is going ahead with a condemnably regressive and blatantly discriminatory clause of reversion to a slab system of fixed disability rather than the one based on percentage of pay.

An example would clearly elucidate the extent of the disparity in the award of disability pension that is being created due to the NANA clause. This is the story of two brothers Raj and Rishi. Raj joined the army while Rishi joined the Border security Force (BSF). While at home on leave together both met with a motorcycle accident because of which their legs were amputated. At that stage Raj (Army) had seven years of service and Rishi (BSF) had five years of service.

The injury sustained by Sepoy Raj of the Indian Army was subject to the NANA clause since he was on leave. He was not entitled to any kind of pension as his service was lesser than 10 years. He was, therefore, invalidated out of service since he could no longer serve as a soldier.

Constable Rishi of the BSF, on the other hand, continued to serve since he enjoyed protection under the provisions of “The Persons with Disability Act, 1995.” He will earn all in service promotional benefits, annual increments etc up to 57 years of age. He will also benefit under more number of pay commission related enhancements in his pay while in service and post his retirement in his disability pension too. An assessment on the prevailing inflation rates suggests that when Constable Rishi does retire he will be entitled to a staggering monthly disability pension of Rs 3,58,909/- and which too will be income tax free.

Sepoy Raj was not so lucky since he had joined the Indian army. He not only lost his job and returned home immediately but also received no pension. Thus this brave and proud soldier, due to his affliction, became a burden on his family.

Issues such as disability pension cannot be based on one-way inputs of the Defence Accounts Department. It is even more painful to note that the findings have been rendered behind the back of the armed forces. The data has been projected with a twist.

The media too appears to have jumped the gun!  Instead of  shooting off adverse comments and casting aspersions on the armed forces they would  have  done well  to understand  and  analyse  the  reasons for the increase in  disability  pension claims .

This flawed dispensation is bound to have a detrimental effect on the morale of the troops. With such unfavourable anomalies further aggravated by unfavourable pay commission recommendations, who will want to join the armed forces. The government needs to be seen as steadfastly standing behind its brave personnel of the armed forcers and accordingly it should reconsider this negative and discriminatory recommendations made in respect of defence forces by the 7th CPC.