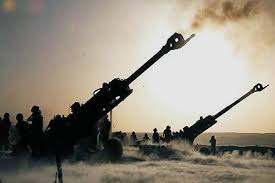 Within a day of the much touted lull in ceasefire violations, Pakistan has stuck again; this has put paid to the hype created by the Indian media about the Pakistan army retracting, tail between legs, due to a massive counter bombardment by the Indian forces.

Sadly, the Indian media (especially the electronic segment) has resorted more to melodrama and sensationalism than a professional coverage of the stand-off between India and Pakistan. As Pakistan started building pressure along the international border in the Jammu region by constant engagement with heavy calibre weapons, the India media started pressurising the government to react aggressively. As the news of a substantial response from the Indian forces filtered in, a Diwali like media celebration was ushered complete with a media victory march. Now that Pakistan has, once again, fired across the line of control in the Karen sector there is a sense of incredulity- how could Pakistan dare to do this after the punishment meted out by our forces?

The reason behind the belligerence being exhibited by the Pakistan army is not hard to find; it is out and out posturing by the Pakistan army to send out two messages. The first is to its political leadership that it should not even try to initiate talks with India without explicit approval of the military masters. The second is to India that there is no point in talking to the Government of Pakistan since it is not in a position to deliver on promises made as a part of peace overtures.

The Pakistan army is aware that Indian retaliation in the Sailkot sector would rattle Nawaz Sharif and his government more than it would in Pakistan Occupied Kashmir (POK) and Gilgit-Baltistan. Hence, it has chosen the Jammu region for the cross border firing with heavy artillery.  The entire 198 km stretch of the international border in Jammu has been activated by Pakistan Rangers leading to death of civilians, intensive damage to property, killing of livestock and migration of thousands of people from their home and hearth. The Kashmir valley that has traditionally been a hot bed of such violations has not seen mush action as has been confirmed by the commander of the Srinagar based Chinar Corps.

The continuing ceasefire violations along the international border in which both parties are now actively involved have the potential of attaining a critical dimension. Let us be honest and give the Pakistan soldier his due, he can be blamed for anything except lack of courage; the Pakistan army will never allow its reputation to be sullied by aspersions of having lost its nerve.

Any insinuation that the Pakistan army has been cowed down by heavy shelling over a single day is highly misplaced. Indian needs to stay prepared for a long haul in this matter. The situation can escalate into an open conflict if the Government of India does not show an exceptional degree of restraint and maturity in the face of grave provocation.

The foundation for this diabolic game plan was laid when Pakistan Prime Minister Nawaz Sharif created a fair degree of antipathy by extending a hand of friendship towards India without consulting the Pakistan army. He also exceeded his brief by subjecting the former military dictator Pervez Musharraf to a trial by the court of law.

That PM Sharif has been adequately muzzled by the military establishment became quite evident in the United Nations General Assembly (UNGA) when he read out a speech quite obviously scripted to the last full stop and comma by the military establishment of the country. After having delivered his address he hurried back home to see if his masters were satisfied with his performance and willing to give him and his government the much needed lease of life.

Prime Minister Narendra Modi disappointed all those looking out for a huge drama in the wake of the statement made by Prime Minister Nawaz Sharif. He chose to brush aside the topic rather disdainfully. “Raising it at the UN won’t resolve bilateral issues,” was his caustic remark. The Pakistan army was then left with no option but to save face with renewed belligerence along the international border and line of control.

The bottom line is that Pakistan’s Kashmir policy has been wholly and irrevocably wrested from the Nawaz Sharif led government by the Pakistan Army and its Jihadi partners. It stands to logic, therefore, that India will have to contend with continued ceasefire violations, infiltration attempts and terrorist activities in the hinterland in Jammu and Kashmir. There is also no doubt left that the infamous Inter Services Intelligence (ISI) will continue using its assets in Kashmir to spread discontent and engineer social disruption.

A welcome sign is that India is not taking the Pakistani hostility lying down. The Indian forces have been given a free hand to counter the shelling and, as reports go, Pakistan is being subject to heavy counter-shelling. A loud and clear message is being sent out that Pakistan will be punished for its intransigence. Now the Indian soldier should be allowed to perform his duty in a manner that he thinks is best. The Indian military response has to be “phased and graduated” to ensure that the matter does not get completely out of hand. His is serious business that should be kept away from unprofessional speculation. There is every reason for the Indian media to exhibit the required degree of maturity that the emerging sensitive situation demands. What is happening should come out as news – not peppered with “Views.”