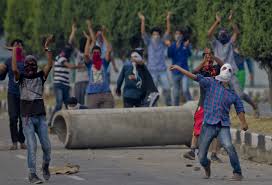 The use of pellet guns as a non-lethal crowd control measure by the Jammu and Kashmir police is, of late, centre stage as the political narrative of the Kashmir Valley.

The most important factor that needs to be recorded, first and foremost, is that the equipment is not repeat NOT being used by the Indian Army. It is being used by the local police of Jammu and Kashmir and sparingly by the paramilitary forces.

It is common knowledge that the state of Jammu and Kashmir has been functioning with coalition governments for the last decade and a half and that regional parties with a distinct Kashmir Valley signature are dominant in these coalitions.

The political narrative of the state is set by the National Conference (NC) and the Peoples Democratic Party (PDP) in turns. Both parties have a signature that is almost exclusive to the Kashmir Valley. In others areas of the diverse state they have only a passing presence.

The decision to induct pellet guns in the Jammu and Kashmir Police was taken by the Omar Abdullah led NC-Congress coalition government. His cabinet, that approved the purchase of pellet gum for the police, comprised of a majority of ministers from the Kashmir Valley.

Before the pellet guns could be used the situation of turmoil subsided. In this intervening period of six years of relative calm, there was enough time for the police force to train itself on the equipment, make an assessment of its efficacy and formulate standard operating procedures for its use.

It is quite evident that no such action was taken and the equipment was put to use without the benefit of training, trail and assessment during the recent round of protests. Evidently, the fault is localised; it has nothing to do with the central government or the Indian Army.

The state government, of course, changed and PDP became the major coalition partner of the existing coalition.

So we have a situation where the police force of the state, while functioning under two regional parties that  have roots predominantly in the Kashmir Valley, has purchased a non-lethal crowd control equipment and is now using the same against protesting people of the Kashmir Valley.

Considering that the entire process is localised to the Kashmir valley it is strange to note that the blame for the fall out in terms of injuries and alleged ‘human rights violation’ is being put on the Government of India and the Indian Army!!

Protestors are coming out in the street and sloganeering for Azaadi (Freedom) while carrying posters having “say no to pellet guns” written on them. It seems that the people of Kashmir have a grievance for one reason (pellet guns) but are protesting for some other reason (Azaadi). They have a complaint against one establishment (Jammu and Kashmir Police/Government of Jammu and Kashmir) but they seek to blame another (Government of India/Indian Army).

The people of Kashmir have an issue with their own elected representatives and their own police force, yet they put the blame on the centre and the Indian army, this is not fair.

Pellet guns are an established crowd control device being used in many parts of the world. The problem in Kashmir is that the government has directed its police forces to avoid contact with irate crowds to every possible extent. The police, therefore, reacts only when its own safety is threatened which happens when the mob reaches very close. Use of pellet guns at close quarters is adding to their lethality.

Of course, the propaganda machinery of anti-national forces functioning in Kashmir and from foreign soils is in over drive to extract as much publicity from this situation as is possible.

People are come out in the street, resorting to violence, attacking security forces, destroying government property and creating total mayhem. When the very life of the security force personnel is threatened they are bound to react. When they react and some civilian gets injured there is a hue and cry raised. Thus the cycle goes on.

In the valley stone pelting is a lucrative ‘business’ with the unemployed youth offering their ‘service’ for a price. Organisations like the Hizbul Mujahideen and Lashkar- e-Taiba, in concert with separatists, have reportedly formed stone pelting groups. The ‘initiators’ start the pelting and leave maintenance of the momentum to misguided youth in their teens who get swayed by the charged environment. The professionals mask their faces and know their escape routes; they usually escape, leaving behind the innocent but misguided youth to face the baton and the pellets.

For a long time now, political leaders from Kashmir have been saying that the problem has a political connotation. There is no disagreement on this aspect; the challenge lies in creation of an environment to further the political process. Under circumstance of engineered violence and targeting of the security forces, there can be no political movement whatsoever.

The Kashmiri perspective comes across as confused, fragmented and divorced from reality. The Kashmir people seem to have created in their minds a wholly incorrect narrative of an armed state terrorising the languishing citizen. They have convinced themselves that India and its security forces are an occupation force out to destroy them.

This fallacious perspective has been propped up by the propaganda of foreign sponsored elements that is not adequately countered by the ineffectual State Government.

The fact is that India, being a big and a benevolent nation, is absorbing the violence and disruption with remarkable resilience and patience.

The common Kashmiri does not subscribe to politics of disruption and is looking only for peace. It is he who is paying a very heavy price for the mayhem being created by his more volatile and often sold out brethren. It is time that the nefarious designs of a select few in Kashmir are exposed so that the voice of the common Kashmiri is heard.  The world should discern fact from fallacy and look more closely at the interest of the common Kashmiri.