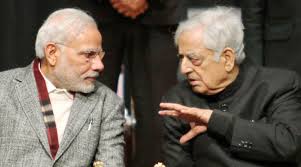 A series of faux pas by the new chief minister of Jammu and Kashmir, Mufti Mohammed Sayeed, has put question mark over the survival of its alliance with the Bharatiya Janata Party, which was majorly borne out of political opportunism than any ideological beliefs.

Within 10 days of the swearing-in of the new government after two months of hectic parleys, serious differences have come to the fore with some BJP leaders even threatening to sacrifice the alliance in the national interests.

The BJP today finds itself in the dock after the unilateral decision of the Mufti government to release hardcore separatist Masarat Alam from jail. The decision, though well within the rights of the state government after various courts permitted him bail, however, caused major embarrassment for the BJP, which swears by its nationalist credentials.

The issue gave fodder to the rudderless opposition Congress party, which alongwith other like-minded parties, has forced adjournment of parliament several times, severely derailing the government’s business agenda. BJP’s alliance partner Shiv Sena added insult by demanding a case of treason against Sayeed as it felt that Alam’s release was a threat to the nation.

Forced into a corner, Prime Minister Narendra Modi had no option but to condemn the state government’s action but by then the damage had already been done. Three days of dilly-dallying by the BJP spurred the PDP to announce the release of remaining political prisoners who had completed their sentence. Had the BJP remained mum further, an impression was gaining the ground that it had been left with the only option to either pull out of the alliance or own up to the anti-national move. There is no doubt that the Mufti had stumped BJP strategists.  With the Mufti keeping on testing the patience of BJP, it was decided to issue a stern warning to the state government, which crumbled immediately. Sensing BJP’s rising tempers, the PDP government released a statement that no political prisoner would be released in future without consulting its alliance partner.  The latest is that both the parties have decided to form a screening panel which will decide the release of political prisoners. The new arrangement is again a victory for the PDP.

Both the parties might have heaved a sigh of relief as a temporary truce has been achieved and the alliance saved. But the BJP is being seen as the biggest loser since it decided to join hands with the PDP. Not only did it have to eschew its most ardent demand of revocation of Article 370, on which it had built its entire campaign in the state, it is also being seen as pandering to the PDP in resuming talks with Pakistan on which it had taken such a tough stand. Even without getting any encouraging signals from Pakistan, the Modi government has launched a political as well as cricket diplomacy to break bread with Pakistan.

It should be recalled that the alliance had started showing signs of strains with hours of the political marriage. One was expecting birth pangs but that the troubles will start so soon even before the marriage was consummated only confirms fears that the two are not meant for each other. The two month-long courtship leading to a hurried and a largely put up marriage with teething issues buried under the carpet is something beyond logic. Its survival is bound to be short-lived. That the alliance could not even enjoy the honeymoon speaks volumes about the inherent contradictions.

The warmth in the hugs between Modi and Sayeed during the latter’s swearing-in ceremony as the new chief minister melted within hours even as Kashmir Valley was experiencing fresh rains and snowfall plummeting the temperature to sub-zero levels. Hardly had Modi dashed off from Kashmir, Sayeed lobbed a bombshell. The peaceful elections and the high voter turn out, we were told, was not because of the efforts of the country’s Election Commission and the security forces. Had Pakistan, militants fighting the Indian rule and separatists, who have lost their significance, not remained quiet, the democratic process in the state would not have succeeded!

Even before the government could settle down, the former separatist-turned-politician Sajjad Lone, backed by the BJP, refused to take charge as he was offered a ministry which he did not consider worth his status. Wow! A classic case of in-laws not happy with the dowry brought by the bride!

All said and done, the recent utterances by Sayeed are nothing but carefully-drafted agenda of the PDP to pander to its domestic constituency which does not gel with the ideology of the BJP, which fancies its chances of expanding its scope in the state. That the BJP registered the maximum gains in the Hindu-majority Jammu region and drew a blank in the Muslim-majority Kashmir Valley sums up the equations. It is clear that the Kashmr Valley views BJP with suspicion. It remains to be seen how the two parties can continue in an unholy alliance and further their respective agendas.