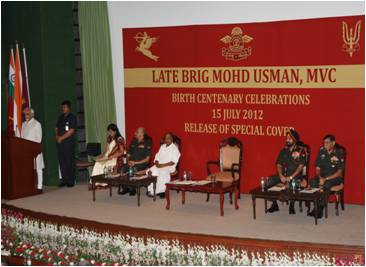 Brig Mohammad Usman was the highest rank officer of Indian Army killed in the Indo-Pakistan War of 1947. At the time of partition, he with many other officers declined to move to the Pakistan Army and continued to serve the Indian Army, despite the bait of becoming the Pakistan Army Chief. He was awarded Maha Vir Chakra, Posthumous, for his role in the war.

The event commenced with the opening remarks by Lt General Vinod Bhatia, Director General Infantry and Colonel of the Parachute Regiment, followed by release of special day cover by the Honourable Vice President. Shri M Hamid Ansari also honoured the next of kin of Brigadier Mohd Usman, MVC, and made a commemorative address to the august gathering. The event culminated with a vote of thanks by Brigadier Sanjay Singh, Commander 50 (Independent) Parachute Brigade followed by screening of the film ‘Naushera Ka Sher’ dedicated to the courageous soldier.