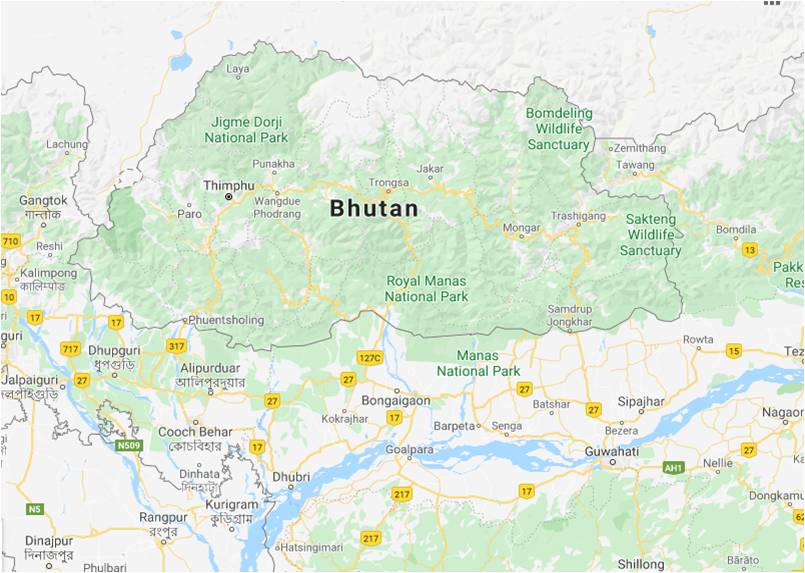 On 29 June 2020, China for the first time objected to Bhutan’s application for financial aid from Global Environment Facility Council (GEFC). This grant was asked for the maintenance and development of Saketang Wild Life Sanctuary located in the Trashigang Province in east Bhutan. Surprisingly, Saketang sanctuary is minimum 100 kms south of the southern frontier of China Occupied Tibet (COT), but still, China claims that it is a disputed territory.

GEFC finally approved the grant after overruling Chinese objection even as this attempt by China is being viewed by the global community and India as an act of intimidation towards the small Himalayan Kingdom. Thimpu also lodged a strong protest in writing to the Chinese embassy in New Delhi stating that Saketang is an integral and sovereign part of Bhutan.

The Chinese foreign minister had earlier conveyed that the China, Tibet and Bhutan boundary has never been delimited and there have been disputes over the north eastern, central and western frontiers for long time. China is also insisting that all disputes will be settled bilaterally, thus implying that Indian involvement will not be acceptable.

Already 24 meetings on the boundary issue have taken place between China and Bhutan since 1984, but without results. Beijing has now called for the 25th meeting with an attractive package to settle the dispute. Bhutan has asked for postponement due to the prevailing COVID 19 environment.

It is notable here that China covertly intruded in Doklam plateau in May, 2017 and started building roads/field fortifications close to the Tri-junction. Bhutan informed India on 18 June, 2017. Indian troops moved in on 20 June  and there was a clash with PLA troops in Chumbi valley. Over a three month standoff, the Chinese were not allowed to continue with the road construction. After several high level meetings, both sides disengaged to the pre-June positions on 28 August, 2017. After a few months the Chinese resumed road building in other areas albeit covertly.

Bhutan, a land locked country, is strategically located between COT and India. Its total geographical area is approximately 38,394 sq km in a mountainous and thickly forested terrain. With India its borders fall with Arunachal Pradesh in the east, Assam and West Bengal in the south and Sikkim in the west. It has a number of mountain passes towards Tibet that are very hazardous and at an average height between 16000 to 21000 feet.

In early 19th century, Bhutan was dominated by Buddhist monks led by a great spiritual leader, Zabardung Rinpoche, who united all the small fiefdoms in region. Later, the Wangchuk dynasty reunited the country after a civil war and established strategic relationship with the British empire.

In 1865, the Treaty of Sinchuli was signed between Bhutan and British Indian government for granting access to borderlands  of Bhutan on annual rent basis. British sponsored Monarchy was established in 1907. Another treaty laid down that the British would not interfere in internal affairs of the Kingdom while giving it protection from Tibetan, Nepal and other invaders. Control of defence and foreign affairs of the Kingdom was retained by the British and transferred to Government of India post Independence. The relationship was ratified two years later by signing of a Treaty of Friendship and Cooperation in 1949, whereby, the Kingdom retained its Independent character while  responsibility of defence and foreign affairs remained with India.

During  Sino-India War of 1962, Bhutan remained neutral and refused operation of military bases by India. This was due to threat by China. Bhutan later permitted withdrawal of  Indian troops from Nam Ka Chu and Tawang through its territory back to India.

King Jigme Dorji Wangchuk, in 1972, handed over the kingdom to his son, Jigme Singye Wangchuk after a successful rule of 34 years. He always remained a good friend of India. King Jigme Singye Wangchuk was succeeded by his son Jigme Khesar Namgyal in July, 2008 on adoption of a Constitution with a two party democracy. Thus culminated a century of absolute monarchy.  Today, the head of state is King Jigme Khesar Namgyel while the executive authority is with an elected prime minister presently Dr. Lotsay  Tshering of Druk Nyamrup Tshogpa party.

The Treaty of Friendship was revised in 2007 with some changes since Bhutan wanted more independence. Subsequently, the country established relations with 52 Nations and also the European Union. Bhutan joined as a member of United Nations in 1971 and is  now a member of Non Aligned Movement (NAM), SAARC and BIMSTEC. Interestingly, Bhutan does not have formal relations with the five permanent members of UNSC including China.

Since 1960, Indian Border Roads have been constructing a net work of roads and bridges in Bhutan connecting the Kingdom with West Bengal and Assam under the “Dantak Project.” India has helped to build the entire hydropower grid in Bhutan to include Chukha Hydro Project in 1986 Khurichu project in 2002 and Tata project in 2008. Indian has also pledged to buy 10000 mw of electricity from Bhutan by 2020. India has funded nearly all of Bhutan’s landmark projects, including the airport at Paro, Bhutan Broadcasting Station, Bhutan-India microwave link, Dungsam Cement Plant, Bhutan Institute of Medical Sciences, and all exploration, survey and mapping of mineral resources. For the 11th Five Year Plan of Bhutan, Government of India contributed an assistance of Rs 4500 crore with an additional Rs 500 crores for the Economic Stimulus Plan.

Governed by the India-Bhutan Trade and Transit Agreement of 1972, in 2016 India stood Bhutan’s largest trading partner. Under the agreement, duty free transit of its exports to third countries has also been granted.

Bhutanese Army officers are being trained at IMA (Indian Military Academy). The Indian Army maintains a training mission in Bhutan, known as Military Training Team (IMTRAT), which is responsible for the training of Royal Bhutanese Army and Guards. Indian Army is also providing Bhutan Army with weapons, vehicles and equipment.

Bhutan has been central to India’s two major policies – the ‘Neighbourhood First Policy’ and the ‘Act-East Policy’. After coming into power in 2014, Prime Minister Narendra Modi opted Bhutan as the first country for his foreign visit. Bhutan’s strategic location has helped India in flushing out militants in the North-East and thus played a significant role in maintaining internal stability.

Bhutan is India’s only neighbour that is yet to join China’ Belt and Road Initiative (BRI). It has remained sensitive to India’s security concerns and has repeatedly turned down Chinese ‘package deal’ offers making bigger territorial concessions to Bhutan in return for the smaller Doklam area.

Prime Minister of Bhutan, Dr. Lotay Tshering met Indian PM in November, 2018, that marked the Golden Jubilee year of formal diplomatic relation between the two countries. New Delhi agreed to strengthen the close bonds of friendship, understanding and cooperation between the two countries. Prime Minister of India stated that in line with Government of India’s ‘Neighbourhood First’ policy, India is firmly committed towards prosperity of Bhutan and a partner in its quest for development and economic prosperity based on the priorities of  the Royal Government of Bhutan.

It was conveyed that India will provide financial assistance for Bhutan’s 12th Five Year Plan. A transitional Trade Support Facility of INR 400 Crore over a period of five years was offered to strengthen bilateral trade, economic linkages and health sector. It was further agreed to expedite the completion of Sankosh and Mangdechhu project.

China has offered many lollypops to Bhutan to develop its infrastructure by giving interest free loans, It has also offered to settle the border disputes if Bhutan agrees to transfer approximately 250 sq km of land in eastern Saketang sector and drop claim on Doklam plateau. Bhutan has not agreed to the proposal and preferred India as a reliable partner. India has to keep eyes on Bhutan so that our strategic matters are not compromised & not let china lure our yet another neighbour in honey trap.