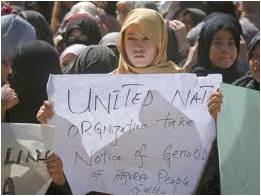 The trouble torn Pakistani province of Baluchistan is being seen worldwide as another Bangladesh in the making. Why exactly is a feeling of this nature being generated? The answer can be derived from a narrative of the current happenings in the province. Recently, a British aid worker was killed in the province by some unknown assailant. The Police has not been able to find the culprit and chances of a breakthrough are dim. Who could have murdered an aid worker who was risking his life for the poor and needy in the troubled province? The choice is wide and varied; it could be the Islamists, the ISI, the insurgents and a host of others.

The possible reasons for killing the person are equally diverse and varied. The Islamists would do so at the behest of the ISI or to send a message to the west that presence of its aid workers will not be tolerated. The ISI could have killed him on the suspicion of being an intelligence agent; it is quite paranoid with the idea that the West wants to free Baluchistan for strategic reasons. Baloch nationals could have committed the murder as a reprisal against foreign powers which they eye belligerently as a force bent upon usurping their resources. Numerous Chinese workers and engineers have been killed earlier during construction of the Gwadar port. It is evident that the motive behind the unfortunate incident is something to ponder over.

On April, 20, Imran Khan, the cricketer turned politician and chairman of the Pakistan Tehreek-e-Insaaf party, organised a political rally in Quetta, the capital of Baluchistan. The rally was massive and the media declared it as historic. It added another feather in Khans cap, his political career being on the upswing. In that rally he said, “The politicians of Baluchistan are incapable of restoring peace in the province. We will also revive the local government system in the province to [allow the benefits] to trickle down to the grass roots level.” Thus, like a true Pakistani Punjabi, he put the blame squarely on ethnic leadership and the federal government of Pakistan. Why did he do so? The answer is quite simple; he catered for the dominant Punjabi sentiment in a rally that was attended mostly by Punjabi’s who have migrated to Baluchistan in the last few decades. What Khan conveniently sidelined was the fact that the sectarian violence in Baluchistan and the Saudi- Iranian war being fought through Sipah-e-Sahaba and Sipah-e-Muhamad are essentially Sunni-Shia clashes. In Pakistan, they are the result of covetous ambitions of his very own Punjabi brethren. Imran Khan is evidently playing the tune of the ISI in Baluchistan.

There is no doubt that the ethic Baloch people do not accept the current political leadership of Pakistan. They do not accept projects like, Gwadar port, Sui gas etc which are said to have the capability of bringing about an economic transformation in their economic status. They are irrevocably opposed to exploitation of the rich natural potential of their lands. Gwadar could not become a successful port due to their violent reaction to the new industry which was to be set up near the port. Their successive attack on Chinese labourers and engineers is also an effort in these lines. It would be credible to suggest that the alienation of the Baloch population is complete and no Imran Khan, Zardari or Kayani can change this reality. .

Recently, the situation in Baluchistan was tabled for discussion in the US parliament and a report was put on record. This interest shown by US is not by mistake. It is propelled by the US need to maintain a toe hold in the province to cater for the eventuality of a prolonged engagement in Afghanistan. Of course the US is keen to de-induct but this may not happen as planned or it may not happen in totality. In either scenario Baluchistan becomes important for the US. Under the circumstance, it is in US interest to free Baluchistan from Pakistan.

The Baloch people have a valid reason to be angry with one and all. Their destiny has become a pawn in the hands of powerful international groups with contradictory agendas. These groups which are pursuing their own line with utmost ruthlessness even as the hapless people of the province bear the brunt. In Baluchistan, it is not a case of some misguided youth taking to the gun. It is an issue of foreign interests and internal sectarian divides playing games, detrimental to the overall benefit of the region and its people.

What options are available with India? For India, the killings, abduction etc is a mere reflection of the tenuous internal turmoil in Pakistan. What gains strategic and policy prominence is how Pakistan is looking at the whole situation and how it is likely to react in the near and the long term. Even though the criticality of the situation and reasons for the same are well known to the Indian government, most surprisingly, nothing is being done to respond to the same. Indian has to firm up its policy to counter Pakistan’s propaganda putting the blame of the insurgency on the country. India can also consider supporting the insurgency on humanitarian grounds. It is better to have US presence over there rather than the Chinese or the covetous Punjabis led by Imran Khan and his ilk. Whatever may be the course of action, India needs to act and act fast, we cannot afford to wait for our mandarins in the ministry of external affairs to react only when the situation gets out of control. By then, we would have missed our chance of making some serious contribution and drawing mileage out of it