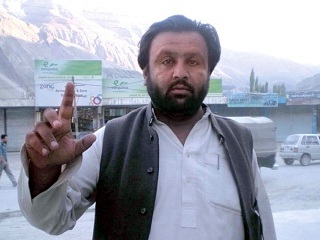 Baba Jan Hunzai is not a terrorist, he is the chairperson of Progressive Youth Front of Pakistan Occupied Gilgit-Baltistan and member of the central executive committee of the Pakistan Labour Party; a simple and motivated social activist who had the courage to raise his voice for the sake of his people. For this, he along with his associates was imprisoned, incarcerated like a common criminal and tortured by the authorities in Pakistan.

A massive landslide hit Attabad in January, 04, 2010, killed 19 people and blocked the Hunza river so formidably that a 23 kms lake was formed. Three villages in Gojal, North Gilgit got submerged rendering thousands of people and families homeless. Baba Jan was in the forefront of an agitation to seek compensation and a new life for these hapless people. He along with a 100 people was arrested for allegedly ransacking a police station and torching a government office after the death of a displaced person and his son due to police firing on an agitation. After the incident Baba Jan realised that Pakistan’s Inter service Intelligence (ISI) was out to eliminate him.

On September, 8, 2011 he made a video of himself where he said that his unnatural death would be attributed to the ISI and then he handed himself over to the authorities. He was arrested for sedition and subject to severe torture by the ISI for three days. Apart from his own party members, friends and relatives, a large number of youth organisations, human rights bodies campaigned for the release of the young activist. Rallies were held in Indonesia, France, Switzerland and Australia for his release. Over a period of time Baba Jan became the symbol of the struggle in Gilgit-Baltistan where the youth consider him to be the ‘Che Guevara’ of their deprived land.

In a rare case, even the Human Rights Commission of Pakistan took up his case and the Senate Committee of Human Rights called the chief secretary of Gilgit-Baltistan to explain as to why the youth leader was kept in jail and tortured. Chairman of the committee, Senator Afrasaib Khattak, went to the extent of reprimanding the chief secretary when he described Baba Jan as an anti-state activist.

Baba Jan was released from prison about a year later in mid-September 2012 with a kidney badly damaged due to incessant beatings and acute psychological trauma due to merciless torture that included pulling out of finger and foot nails and body hair, shaving off the head and other unspeakable atrocities. The release is, however, on bail which means that the Damocles’ sword of re-imprisonment hangs over him all the time.

The man is physically broken and psychologically fragile but his spirit is very much intact. He continues to fight for the rights of his people. He is in the forefront of the angry protests against Pakistan’s expansionist designs and blatant colonisation of the land that is essentially disputed. Baba Jan is now a strong voice against forcible occupation of 2800 square miles of the regions land mass by the Chinese and annexation of Kohistan and Chitral into the Pakistan federation. Kohistan has been integrated into the Province of Khyber Pakhtunkhwa even though historically it forms a part of Gilgit-Baltistan. Similarly Chitral, which was formerly a Princely state that had affinity with Gilgit-Baltistan, has also been integrated to Khyber Pakhtunkhwa.

“People have been kept as slaves here,” says Baba Jan while speaking about his beloved Gilgit-Baltistan. “In order to strengthen the clutches of that slavery outside forces and local government have instilled fear. Government is bluffing people and human rights institutions by setting up a puppet system here. This set up has no political and constitutional base,” he adds most forcefully. Clearly he is not one to mince his words due to fear of reprisal by the ISI and the puppet government that he derides so openly.

Another cause that Baba Jan is quite vocal about is the large-scale migration of Pushtuns from the restive North-West and Punjabis from the politically influential province of Punjab to Gilgit-Baltistan. They are changing the demographic profile and creating a volatile Sunni-Shia divide. Due to a series of well organised targeted attacks in 2012 that led to the murderous killing of about 60 Shias in 2012 on the Karakoram Highway (KKH) itself the community members are now reluctant to use the key road link that connects Gilgit-Baltistan to the rest of Pakistan. Thus, the people have been practically imprisoned in their own lands.

Many nationalist groups including the Progressive Youth Front of Baba Jan have started a movement for resumption of trade with India and Afghanistan through the historical routes of Kargil, Chorbat, Astore and Ishkoman. In view of the colossal humanitarian problem being faced by the people of Gilgit-Baltistan due to their dependence on a single communication link (KKH), India should move towards opening an alternative link from Kargil that has been demanded for many years now. Cross border trade routes that have already been opened at a few points between Indian and Pakistan; this facility can easily be extended to Gilgit-Baltistan also.

India has a moral and humanitarian responsibility towards the people of Gilgit-Baltistan and this can be best met by extending support to fearless warriors of the cause like Baba Jan who are ready to bear any pain and deprivation for the sake of their people. It is such voices that Indian needs to take to the rest of the world to expose the duplicity of Pakistan and the covetousness of China that is causing so much pain and suffering to the people.