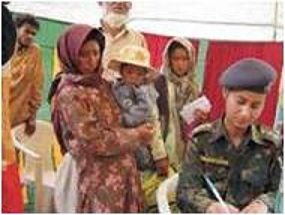 This is a true story narrated to me by villagers during one of my visits to the remote regions of the Kashmir valley. The names have been changed on the request of the involved individuals. A young Kashmir lad, Anwar, had some land along the line of control in the Kashmir valley. His mother had died when he was one year old and his father was killed accidently in cross firing during an operation ten years back. Anwar had been told that the Army had killed his father for which reason he bore a grudge against the force and hated the men in uniform. With time, Anwar grew up and got married to a beautiful girl called Zubeida. In the second year of their marriage they were expecting their first child.

Anwar’s land, being on the line of control, often became a battleground of encounters between the army and infiltrating terrorists. Also, on some occasions, he was stopped by the soldiers from going in to his land due to security reasons and this increased his acrimony towards them. The fact that he sometimes lost his crops during the encounters of the forces with the infiltrating terrorists caused him further anxiety. As time passed his dislike for the forces increased and he missed no opportunity in airing his views. His resentment was further instigated by those who wanted to put the army in bad light; they constantly fed him with propagandist views. As a result his resentment against the army became so deeply embedded that he went to the extent of filing of first information reports in the local police station against the force. The army, in turn, did not react and chose to keep a distance from Anwar.

As time passed Zubeida’s delivery date arrived and she got her labour pains in the late hours of the evening. There was no medical facility in the village and Anwar followed the traditional route of calling the local mid wives to assist in the delivery of his child. The mid wives, after a while, told him that there was a complication in the case that may lead to death of his wife and child unless they got to a hospital in time. Anwar came face to face with potential disaster since the nearest hospital was about 25 kms away and there were no means of transport, naturally he was distraught and desperate.

It was at this time that some village elders advised Anwar to approach the nearby army camp and request for assistance. Anwar was hesitant since he held a grudge against the force and was reluctant to approach it for a favour; he also felt that since he had been openly speaking against the army personnel they would not come across to help him. However, the situation was getting from bad to worse and on the insistence of the elders Anwar went to the camp almost by midnight.

The sentry on duty took his credentials and went to inform the commander of the company operating base who was of the rank of a Major. The commander immediately came out and heard the story, he also recognised Anwar as one of the chief detractors of his force in the village. Despite Anwar’s absolute conviction that the matter would not progress, the commander immediately got into action and arranged for a vehicle with an escort to take the lady to the nearest hospital. Not only this, in view of the gravity of the situation, he went with the party himself. When the party reached the hospital the attendants checked Zubeida and said that she needed to undergo a caesarean section for which the doctor would be available only in the morning. By this time Zubeida was almost senseless; it was very obvious that her condition was critical and that she was sinking. The army major took the situation in his control; he found out the house address of the specialist and went there to fetch him. The doctor was kind enough to come, despite the, by now, early hour of the morning and immediately Zubeida was operated upon.

The operation was successful even though the doctors termed it as a miracle. Zubeida was blessed with a healthy baby boy. Anwar was relieved and ecstatic, he came out to thank the Army personnel for all order viagra online that they had done for him. The army major told him to save his energies for looking after his wife and child and left the happy family in the safe hands of the doctor to get back to his duty for the day. Anwar realised that he had been wrong in holding a grudge against the army; he had a change of heart and started assisting the army in countering the menace of terrorism. This incident had a great impact on the locals of the region.

What, however, is quite evident from the foregoing is that the army is always out to help the locals in every way that it can and by so doing it has made a great difference in their lives, especially so, in the remote in accessible areas of the state. The frustration that the locals feel due to the violence is justified but then it is not initiated by the army; it is the handiwork of inimical foreign sponsored elements. In fact, these evil forces would completely subjugate the poor civilians and exploit them if the security forces were not there to provide protection. Like Anwar, there are many people in the valley who now realise that they held a wrong impression about the army. They feel very safe with the army in the vicinity and would feel very insecure if the camps are suddenly removed. At the end of it all it is humanity that has prevailed.