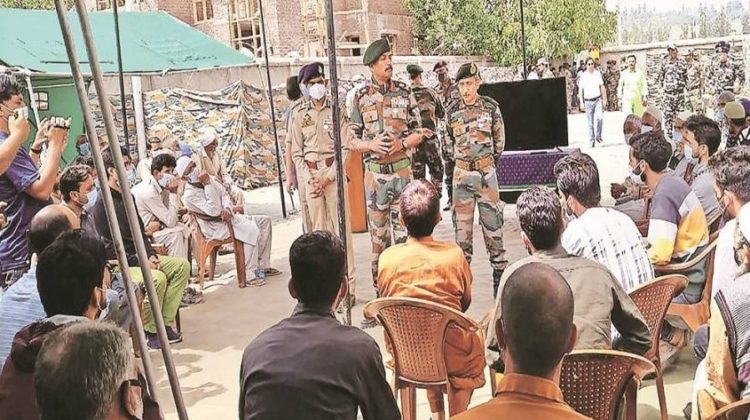 In what is heralded as the first outreach of its kind, Lt. General DP Pandey, General Officer Commanding (GOC) of the Srinagar based Chinar Corps of the India Army, “directly and face to face” addressed 83 family members of active terrorists and urged them to guide their wards back into the mainstream of society. The interaction took place at Shopian on 31 August. On the podium with the GOC was IGP Kashmir, Vijay Kumar, which indicates that the outreach had clearance from the highest level and constituted a “whole of Government” approach. There are indications that such outreach initiatives will be taken in other areas of Kashmir too in the future.

The choice of Shopian as the first destination for the outreach is significant since the area is a so-called hotbed of terrorism and a significant resource point for recruitment of local boys as terrorists. In the choice of Shopian, a message has been conveyed that the security forces can talk to families of active terrorists in their own area. Also present were families of adjoining areas like Pulwama, Kulgam and Anantnag.

Even though this is the first “direct and face to face” interaction of senior security officials with families of misguided local youth who have been indoctrinated to follow the evil path of terrorism, similar appeals have been made from time to time by many senior political leaders, government officials and security officers.

Union Ministers visiting the valley make it a point to meet the youth and motivate them towards pursuing a path of professional advancement within the fold of the national mainstream. There have been so many instances of general amnesty being granted to the youth for misdemeanours; an example is the withdrawal of cases against the stone pelters in 2018 on the premise that they are young and prone to misguidance by anti-national elements.

There is an effective surrender policy in place which gives ample facility to terrorists, to the extent of ensuring their rehabilitation through financial assistance; many have availed of the benefits to their advantage.

Successive Army Chiefs, during their visits to the Valley, have reiterated an appeal to those pursuing the path of terrorism to come over-ground and look at peace as an option. Security forces have a policy in place where trapped local terrorists are given an option to surrender with the assurance of their life being spared and further rehabilitation. In many cases parents and relatives are called to the encounter site itself to convince the terrorists to surrender. 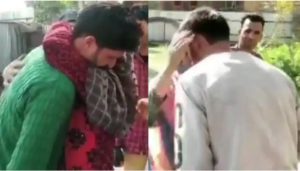 Terrorists motivated by families surrender during an encounter in Kashmir

On the other hand, the anti-national elements in the Valley, with complete support of their masters across the border, have put in place a massive propaganda campaigns through the social media designed to attract Kashmir youth towards the path of terrorism by spread of misinformation. The rhetoric that is being used is unsubstantiated and inflammatory. The youth are told that by picking up the gun they are fighting a holy war. Sustained repetition has a psychological impact on vulnerable minds and the simple boys start believing the propaganda. Once vulnerability is identified, the recruiters move in for the kill.

The Indian government needed to come up with innovative ideas to isolate these influences and create a far stronger counter narrative. The latest initiative by the Army of establishing direct channels of communication with the families of the active terrorists is one among a series of affirmative steps to tap the flow of terrorism. The outreach programme is designed to reduce terrorism in Kashmir and are a significant part of the overall policy of the Army to use soft power to accrue gains that go beyond physical neutralising of the terrorists. The objective is to expose to the masses the foreign hand which is responsible for the indoctrination of the youth through huge flow of funds and expert use of modern tools like social media.

“All assistance will be provided to the misguided youth in enabling them to surrender, the security forces will work with these youth to address their concerns and assist them in joining the mainstream,“ said Lt. General DP Pandey to the gathered families. He also reiterated the commitment of the security forces to take surrenders even during active operations and urged the families, especially the parents, to appeal to their wards to shun the path of violence and return home. The fact that the IG Police was present when this assurance was given would have given the confidence to the families that they will receive full cooperation from the Government and the Police in application of the policy. Undoubtedly, the novel interaction in Shopian by the senior security officers would have instilled confidence and conveyed the intent of the security forces to the families of active terrorists.

The political leadership now needs to step up efforts in a similar direction to check the flow of youth onto the misguided path of terrorism. They have to carry with them all other elements of society like the parents, elders, civil society, religious leaders etc. They have to invoke the ancient cultural roots of the region based on Kashmiriyat and Sufism to fend off the alien concept of Islam which calls for a mindless Jihad and violence.

Terrorism in Kashmir is gasping for breath; it is surviving due to indoctrination and recruitment by the enemy of a few local youth into this shameful and dishonourable path. A lot of success has been achieved in plugging this evil menace. One hundred percent success, however, remains evasive. There is, as such, a need for Kashmiri families to introspect; can parents and families of terrorists be absolved of all responsibility? Should they not be ensuring that their children remain away from foreign sponsored machinations and indoctrination?

It is necessary for the people of Kashmir to heed the well intentioned words of the security forces as conveyed by the senior most leadership and take necessary steps to find a permanent solution to the scourge of terrorism that has cause so much harm to their lives. It is a “now or never” situation for them.

(Dr. Simrit Kahlon is an academician  and columnist)