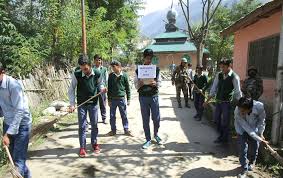 The dictum, “Cleanliness is next to Godliness” is gradually being espoused in the social and cultural domains of the Indian society.  Apropos, Army has played a catalysing role by promoting the importance of cleanliness amongst the people around Army cantonments and camps, especially so in the state of Jammu and Kashmir.

Indian Army, while taking forward Prime Minister Narendra Modi’s agenda of Swachh Bharat, has involved itself in cleanliness drives. This apart, the primary motive of the drive by the Army, since the launch of the campaign in October 2014, has been to maintain the ecological balance wherever it can play a role in doing so.

Army officials along with local residents in Jammu and Kashmir have regularly been taking up ambitious cleanliness drive. They clean out their residential and common areas and give a sterling example of the manner in which the Swachh Bharat Abhiyan should be implemented in letter and spirit.  Such habits, in any case, are intrinsic to the character, ethos and traditions of the Armed Forces. Apart from general cleanliness, Army troops deployed in remote areas of the state have always taken keen interest in environmental conservation.

The Army covers the conservation drive in various verticals which include serving personnel, ex-serviceman, and initiatives within and outside the cantonments and in operational areas.

The Indian Army soldiers work shoulder to shoulder with the villagers for the cleaning up of the public areas. More than the cleaning, it is the greening with planting and nurturing of threes that the army primarily focuses on. Through personal example, awareness is generated among the locals about the benefits of the nationwide “Swachh Bharat” campaign and the need for all citizens to participate in the same energetically. The awareness drive includes educating the locals about the importance of the campaign and how it can help to improve the surrounding areas and the general health of the citizens.

As a result, a wild enthusiasm for cleanliness has lately been seen among the public in the Kashmir valley. People are taking a pledge to improve their village and the surrounding areas.

Beside this educational content, structured information on the crucial aspect of hygiene and sanitation has been included in all programmes undertaken by the army. Such information is also being given during the medical camps that army units regularly organise as part of their welfare initiative, Operation Sadbhavna. The information is critical for ensuring good health during the forthcoming difficult months of the winter season. The information being imparted includes policies of Government and how they can be juxtaposed with the comprehensive rural sanitation programmes to gain maximum benefit.

‘Shramdaan’ and clean the area in and around the place one works, is a routine activity for Indian Army personnel. Cleanliness forms a daily routine in all military units across the country. In fact, this is the military tradition across the world. The families and children join the soldiers, more so in activities like tree plantation, hygiene and sanitation awareness camps and cleanliness drives. Roll calls, Sainik Sammelans and briefings during everyday routine find this aspect being highlighted. Now the Army is extending its personal example to the public in Kashmir with astounding results.

Even in far flung operational areas where army units are deployed, the brave soldiers make a genuine endeavour to clean the areas and also build on its fragile ecology. In this too the soldiers are actively involving the locals and the results have been inspirational.

Public sanitation was a subject about which Mahatma Gandhi was deeply involved with throughout his life. Gandhi devoted a great deal of time to instilling in Indians an appreciation of the importance of sanitation and tried to rouse the Nation’s consciousness on this vital issue. It is important to note that Gandhi’s published works devote significant attention to the cause of public sanitation, on parity with his focus on Satyagraha, Ahimsa and Khadi.

Gandhi’s vision of an ideal village was one with perfect sanitation, village lanes and streets free of all avoidable dust. In his book “Ashram Observances in Action”, Gandhi writes that sanitary service is an essential and sacred service and yet it is looked down upon in society, with the result that it is generally neglected. This area according to Gandhi afforded considerable scope for improvement.

Gandhi’s Sevagram Ashram laid emphasis on engaging no outside labor for sanitation work. The ashram inmates, including Gandhi himself, his wife and all members of his family, themselves attended in turns to requirements of sanitation. The Ashram had in place easy to use latrines that did not require a scavenger to clean. The Ashram rules went to the extent of laying down rules for cleaning of hands and wiping them with clean napkins.

Mahatma Gandhi has been very rightly designated as the role model for the Swachh Bharat Abhiyan and the movement has been initiated on Gandhi Jayanti.

The climate, ecology and rich flora and fauna of the Kashmir valley makes it incumbent to keep the area spotlessly clean. A failure to do so can lead to devastating health and livelihood related repercussions. Kashmir, more than any other region of the country, requires pursuance of the cleanliness values espoused by Mahatma Gandhi.

Espousal of the objective of maintaining cleanliness will have far reaching advantages of ensuring clean, green and healthy environment and availability of clean water resources in Jammu and Kashmir. Such endeavours will help in preserving the pristine beauty of the state and also give a fillip to economic activities, including tourism.

The assistance being provided by the army in taking forward the Swachh Bharat mission in Jammu and Kashmir is invaluable indeed. It is yet another indicator of the bond that exists between the soldier and the common man and how they come together for the common good of the people and the state. It is quite apparent that the effort is inspired by patriotism.

(Farooq Wani is a reputed journalist and columnist)