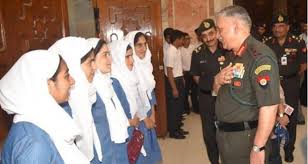 Amidst the environment of despondency that has enveloped Kashmir for quite some time now, the recently declared result of the IIT-JEE Advance examination has brought happy tidings. A record nine students of the 2016-17 Super -40 batch being coached under an initiative by the Indian Army have cleared the coveted competitive examination.

This is the best result achieved since inception of the initiative in 2013. It is notable that the result has shown an upward graph year by year which has motivated the Army to increase its scope. The Army has declared that the next batch will be of Super-50.

Unrest in the Kashmir Valley is being spearheaded by teenaged school boys. They are, quite obviously, indoctrinated and misled into following this destructive path by forces inimical to ushering of peace and prosperity in the state of Jammu and Kashmir, especially so, in the Kashmir valley. Under the circumstances, channelising the energy of the youth towards constructive activity is an imperative for defeating the forces of terrorism, separatism and divisiveness.

Inadequacy of higher education is a major disadvantage for students aspiring to compete in national level examinations. The problem gets amplified for children from the lower socio-economic strata.

Education, therefore, emerges as a fulcrum for any initiative to capture the energy of the youth in Kashmir, more so, since Kashmiris’ are very conscious of its importance in meeting their aspirations.

It was against this backdrop that, in the year 2013, the Srinagar based Chinar Corps of the Indian Army in concert with the Centre for Social Responsibility and Leadership (CSRL) launched the Super-30 initiative to provide a platform for the underprivileged yet talented students of the Kashmir Valley. The idea drew inspiration from the widely acclaimed Super-30 programme initiated by Shri Abhayanand in Bihar.

Every year since 2013, a select number of students from economically weaker sections of society in Jammu and Kashmir who possess an aptitude and capability to sit for competitive examinations in the Engineering stream have been picked up for coaching under aegis of the Indian Army.

The selected male students are lodged in Srinagar while the selected girls are sent to the facility of CSRL in Noida, Uttar Pradesh. Boarding and lodging as also facilities include classrooms for teaching, computer laboratories, study room etc are free of cost.  A resident faculty comprising of three members – one each for Physics, Chemistry and Mathematics is employed to provide coaching in concert with a structured curriculum.  Necessary value addition and critical competitive edge is provided by a number of teachers with wider experience being brought in from Delhi, Kota, and other places.

The intensive coaching is provided for a period of 11 months from May to April every year.

The budgetary support for the programme is provided through public/private companies under their Corporate Social Responsibility (CSR) initiatives and the funds are routed through CSRL. For the pilot project in 2013-14, Power Grid India contributed Rs 30 lakhs; for the second batch Rs 50 lakhs were provided by Rural Electrification Council (REC); the third batch was funded for Rs 50 lakhs by TATA Relief Committee (TRC).

The first batch started with a positive note with one student cracking the IIT/JEE, seven students getting through for NIT, Srinagar and the remaining qualifying for admission in other State Engineering Colleges. In the second batch three students qualified for the IIT/JEE, nine for NIT, Srinagar, nine for AMU and 13 for the JKCET. In the third batch, 03 qualified for IIT-JEE advance and 13 cleared the JKCET exam. In fact, 15 students cleared the IIT/JEE mains but 12 could not get through the final stage.

For the current i.e. fourth batch, a tripartite agreement was signed with Petronet LNG Limited (PLL), Indian Army and CSRL.  PLL agreed to provide Rupees Eighty Nine Lakh Fifty Thousand for the project as part of its CSR initiative. The funds were released by PLL directly to CSRL progressively, as per a schedule which formed part of the agreement.

The fourth batch has set a record of nine students clearing the ITT-JEE examination. It is notable that even when the Kashmir Valley was enveloped in unrest and turmoil during the summer months, the coaching of the current batch went on unhindered.

It was a proud moment for the twenty four successful students when they met the Army Chief, General Bipin Rawat at New Delhi on June, 13. The students thanked the Army for shaping their careers; the Army Chief appreciated their

courage and commitment and urged them to motivate the youth of Kashmir to shun violence and follow their footsteps.

The students later met the Dr Jitendra Singh, Minister of State at the PMO. While felicitating the successful candidates he also lauded the efforts made by the Indian Army towards constructive engagement of the youth.

Due to its long association with the people of the state, the army has developed the capability of catching the local pulse and coming up with very progressive initiatives.

About two decades back it stepped into the field of school education by opening Army Goodwill Schools. Most of these schools today are up to the Class XII level under CBSE Board. They are being runs by local representatives with support of the Army and educating thousands of aspiring students.

Under its welfare initiative Operation Sadbhavna the Army has, for many years now, been providing vocational training to youth and women through centres opened across the state.

The Super -30 programme is one of the best initiatives taken by the Army; it is a path breaker in the process of meeting local aspirations.

The Army, however, has a limited capacity in this domain. A good option for the government would be to ride on the model provided by the Army and institute such initiatives across the State. This would ensure maintenance of momentum. In case every student is given an opportunity to reach the highest level of his competence the problems of Kashmir will ease out considerably.

(Dr. Simrit Kahlon is an academician and columnist of repute)