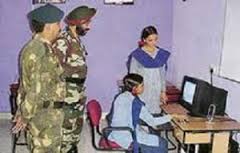 The challenge to security in Jammu and Kashmir is gaining a different dimension. On the one hand there is talk of diluting enabling legislations like Disturbed Area Act and Armed Forces Special Powers Act (AFSPA) and on the other hand, terror mongers based in Pakistan are making a concerted bid to raise the levels of disruption, misinformation, violence and terrorism in the state, especially in the Kashmir valley.

The separatists are leaving no stone unturned in deriding the security forces through concerted campaigns based on misinformation. They wish to give an impression that the presence of troops is causing economic deprivation of the people of Kashmir. They are raising many other issues of state suppression and violation of human rights.

The falsity of such statements and acts by the separatist and divisive forces needs to be exposed.

In actuality, the Army is fully involved with the development of the state. Apart from performing its prime responsibility of ensuring internal and external security, it has a stake in a large number of economic, social and infrastructural areas. Its developmental efforts are assisting the state in its march towards progress and prosperity.

The army’s presence generates economic development of the region, its routine maintenance activities require hiring of transport and porters and ponies. Requirement of milk and other food products for the troops is met through local resources. Thousands of people get employment due to this economic activity, whose financial outlay runs in hundreds of crores of rupees.

The most sought after is recruitment of local youth in the Army and Territorial Army. Huge crowds throng army recruitment rallies held across the state to fill up the generous quota of vacancies allotted to the state for army recruitment. This apart, the state has Territorial Army (Home and Hearth) battalions and Ecology battalions whose quota is over and above that of the regular army. All vacancies for these organisations are filled in no time with a large number of those selected coming from the Kashmir Valley.

In the area on social development the Army has in place, since the last few decades, a project called Operation Sadhbhavna. Operation Sadhbhavna focuses on education, women and youth empowerment, rural health care and many other development initiatives. Under this, the Army runs Goodwill Schools which impart education to thousands of students. Assistance is also provided to state government schools in the form of renovation of buildings; construction of additional class rooms, toilets and playgrounds; provision of furniture, stationary, books, computers and educational software packages. The Army carries out cross cultural integration by conducting educational tours for children and elders to various regions of the country. In addition, it runs Women Empowerment Centre’s to provide skills to women and assist them in becoming economically self sufficient. Vocational Training Centre’s help the youth add to their vocational skills and thus prepare them for a career.

For Gujjars and Bakharwals assistance in the form of tented schools, veterinary camps and meeting basic needs is provided. Children of these tribes have been sponsored fully for studying in residential schools in other states and also in Army Goodwill Public School, Rajouri.

In the matter of infrastructure development the Army has been in the forefront by building roads, bridges, community halls etc and providing basic amenities like water storage facility, electricity, roads, sanitation etc. especially in the remote areas where government agencies have difficulty in operating. All of this is done in consultation with the local people and with the intention of improving their quality of life.

From the foregoing it becomes evident that the view generated by separatist sponsored propaganda about the role of the army in Jammu and Kashmir is highly biased and incorrect.

There is no doubt that politics in a democracy are, by and large, messy and different parties support different ideologies and policies. However, one thing that remains constant is national interest. The politics of J&K, unfortunately, are based only on self interest. The resultant contradictions, the divergent self serving postures, the rapid shifts to agitation after conduct of peaceful democratic elections and the vague ideologies get together to produce a logic defying cocktail.

Under the circumstances, it becomes difficult for a casual observer to clearly distinguish between what is good for the state and what is not. The unjustified demands for withdrawal of troops and the campaigns of misinformation about role of Army in J&K are shining examples of this malaise.

The fact is that those opposing the security umbrella in the state are divorced from reality. They are not taking into account the volatile situation that marks the neighbourhood; there is a civil war like situation on in Pakistan; more and more nations are now convinced about it being the epicenter of global terror. China’s covetous interest in Gilgit-Baltistan is resulting in a gradual shift of control of the disputed territory into it hands. Overall, the borders of the frontline State of J&K are witnessing turmoil. The emerging situation has hugely negative strategic implications for India.

Under these critical circumstances a call for decrease in the security vigil amounts to throwing the people in front of a pack of wolves. Any such move will impact not only security but also the economic sustenance of the state. The issues concerning J&K have to be dealt with a firm resolve wherein the interest of the people is kept paramount. Small political gains and brinkmanship have no place in this very serious business.

Fortunately, the government of J&K has not taken any hasty decisions. It is conscious of the fact that the existing environment in the state is not conducive for a letdown of guard and vigilance in the state. It is hoped that this perseverance against forces inimical to the security and development of the state will prevail.

(Jasbir Sarai is a retired army officer and an AAP activist)