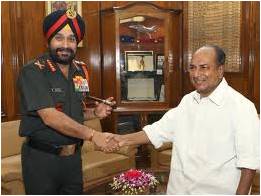 General Bikram Singh had, immediately on assuming the appointment of Army Chief, promised to reduce the prevailing tensions between the army and the ministry of defence and expressed confidence that he would be able to iron out all differences. It seems that he has made considerable progress on this front as is evident from the pace at which weapon procurement is progressing.

The recent momentum towards defence acquisition in the otherwise lethargic ministry of defence witnessed yet another bout of decisiveness with the clearance for purchase of Rs 20, 000 crore worth of military hardware in a single day. Defence Minister AK Antony presided over a long-winded meeting of his Defence Acquisition Council (DAC) to give an immediate clearance for critical acquisition proposals that had been gathering dust in his ministry for many years now.

The army emerged as the biggest beneficiary of this new found alacrity with the clearance to purchase eight regiments worth of Quick Reaction-Surface to Air Missiles (QR-SAMs), worth over Rs 10,000 crore. Three regiment worth of equipment is proposed to be acquired in the ongoing twelfth five year plan. The army will now send out a global request for proposal for procuring these missiles. The time to celebrate, however, will come only when the equipment hits the Indian shores since the proverbial slip between the cup and the lip is usual practice for the ministry and its integrated headquarters. Presently, the Nation has no option but to remain on tenterhooks, since its existing air defence capability based on the outdated Russian built Kvadrats is next to nil; in case of a conflict the enemy will have a field day on Indian skies with no deterrence whatsoever. One can only hope that things will work out this time round. The likely contenders in this project include American Raytheon, Israeli Rafael and French MBDA. DRDO is also planning to co-develop QR-SAMs with the French government but the agreement, as usual, has not yet come through between the two sides; it will, most likely, fructify only when the equipment becomes obsolete, such is the pace that our elite research organisation maintains.

On the IAF proposals, after the success of the pilot project of the Air Force Network (AFNET), it will be implemented as a nation-wide network by procuring 14 Dornier aircraft. Proposals of the Navy and the Coast Guard to procure 30 mm guns for their warships were also approved in the meeting.

It seems that the ministry of defence is mulling over the idea of doing away with its faulty ‘nomination method’ of buying equipment from Public Sector Units (PSUs) without a competitive process. In accordance to this process, a Defence Public Sector Unit is identified as a nodal agency for purchasing a certain type of equipment. For example, in the case of the Tatra controversy, Defence PSU BEML was nominated to supply trucks for the Army without competitive bidding. In case the government can implement this decision, greater competition would come by calling in players to bid for the contract as a partner agency.

It is fervently hoped that this momentum will be maintained and the ministry will never again fall prey to personal egos and petty bickering.