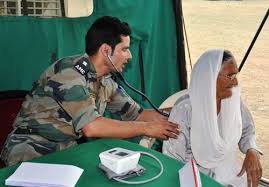 Kashmir is presently going through the period of Chilla-e-Kalan. This period represents the harshest 40 days of winter in the Valley marked by glaciated conditions with icicles hanging down from the trees, slippery earth/roads and frozen water. In fact, getting fresh water is a challenge since all taps and water pipes remain frozen. Movement outside the house is severely restricted. Interestingly this is the period before the advent of snowfall, which brings with it some respite from chilling cold.

As the valley grapples with Chilla-e-Kalan with roads and communication channels closing down, few outside the region are aware of the massive effort that goes into preparing for this period and the overall harsh winters. Fewer know the contribution of the Indian army personnel posted there in making the lives of the locals easier while straying operationally active themselves, despite the hostile weather conditions.

The extreme cold conditions lead to general sickness and many emergency medical cases for which aid is not easily available. The situation is even more critical in remote areas of the valley where communication is a challenge even in the best of conditions during summers. There was a time, during the period of peak terrorism, when no doctor or nursing assistant was ready to man the Primary Health Centres (PHC’s). Presently, with efficient governance in place, the PHC’s are functioning and the situation is much better but still the capacity of the PHC’s to function independently remains limited due to a host of administrative and climatic challenges.

The Army in Kashmir is well aware of these problems and prepares its medical assistance plan in concert with the PHC’s and the community leaders well in advance and very meticulously. Much before the winter sets in, adequate communication facility is established between the PHC’s and the nearest Army locality to ensure that maximum assistance is made available as a routine and more so during emergencies. The presence of the army is a great morale booster for the PHC’s and they remain motivated toward performing their duty.

Years of experience has created in the army a system to prepare for the winters well in advance, as was done this year too. As the Kashmiri people built stocks of dried vegetables and other items for the winters, especially Chilla-e-Kalan, the army too began its preparation for medical assistance.  The first stage of preparation entailed holding of medical camps. Before the onset of Chilla-e-Kalan in the ongoing winters, medical camps were held across the valley and extensively in remote areas. A general round-up of the health of the locals was taken and those needing special care were advised, assisted and helped. Apart from the medical check-up, classes were held to educate the locals about health problems that they are likely to face during the winter and the steps required to be taken to avoid the same. Doctors from the army and from the civil medical services as well as volunteers worked together for this noble cause. A few of these medical camps elicited coverage by the media but most went unheralded due to the remoteness of their location. All of this was done by the army under the ambit of its humanitarian and development oriented scheme – Operation Sadbhavna. Active support from the Government health services was sought and it was forthcoming with enthusiasm.

The troops deployed in remote area have a good stock of medicines and the regimental medical officer strength is to capacity.  Army medical officers have been regularly visiting areas in their unit responsibility to see that everything is all right. Despite the cold wave, medical camps are being held regularly and medicines are being disbursed free of cost.

There are standard operating procedures in place to carry out medical evacuation of emergency cases both by road and by air. Fully equipped Army ambulances and other vehicles are ready for this purpose; the process for carrying out air evacuation by requisitioning Air Force helicopters, mostly MI-8 is in place. Special attention is being paid to remote areas like Gurez where air evacuation is the only option.

Keeping the communication channels open is crucial all through the winters in order to ensure timely movement of medical emergencies.  It is for this reason that the Army is mostly seen working in conjunction with the civilians in snow clearance. The joint effort also strengthens the bond between the public and the army personnel.

Over the years, the other security forces (Jammu and Kashmir Police and the paramilitary forces), have also started contributing gainfully towards creating facilities for the winter season. They are constrained, not by intention, but due to limited resources as compared to the army, but the will is there and whatever is available is put to use optimally. This year, a large number of non-government organisations have also joined in the effort to ensure that the winter months in Kashmir become more bearable, which is a good sign.

As in the previous years, this year too there have been instances when the good work being done by the forces has been misconstrued with the intention of harming the good reputation of the security forces. Inimical forces are leaving no opportunity to spread propaganda about there being some hidden agenda behind provision of such assistance. The people very well understand that the assistance being provided is no more than a manifestation of the close bond between them and the security forces. The harsh conditions for survival are equal to all and they bring the locals and the soldiers close to each other. The army and other security forces, as such, tend to ignore such diatribes by a few frustrated people. For them, the biggest joy comes in the form of the happy faces of those who benefit from their humanitarian gestures.

The goodwill of the army, however, should not lead to complacency in the Government of Jammu and Kashmir. There is an urgent need for the government to ensure that there is adequate medical infrastructure in place to meet all health related challenges. Extensive use of technology should be resorted to. The number of PHC’s and staff on ground also needs to be boosted so that the distance between the patient and the hospital is reduced. There are many countries across the world that face such weather related challenges, their methods and procedures need to be studied, modified for local conditions and implemented.

(Jasbir Sarai is an Army veteran and a social activist)