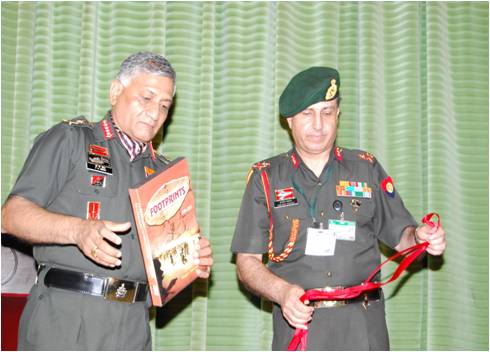 The bi-yearly Army Commanders’ Conference commenced at New Delhi on 25 April. nThe conference will focus on defence related macro issues pertaining to security challenges, operational preparedness, transformation, logistics and administrative aspects. While speaking about the global and regional trend, Army Chief brought out that the ‘strategic shift is more in favour of ‘balance of interest’ than ‘balance of power’. He said a major concern is the acquisition of weapon of mass destruction by non-state actors. He emphasized the need to focus completely on operational preparedness, training and habitat for the men.

During the conference, the Army Chief, General VK Singh, released a book “Footprints – On the Sands of Time; Indian Army’s Unique Achievements”, during the at Manekshaw Centre, New Delhi. The book is a follow up to the immense response received for a previous book, “Milestones of the Indian Army”. It has been compiled by a team of officers of the Additional Directorate General of Public Information, Indian Army. It comprises of more than 200 entries, which are historic record breaking or unique in their own way. It is an exhaustive compendium highlighting Indian Army’s unique achievements through the ages, particularly the 20th Century.