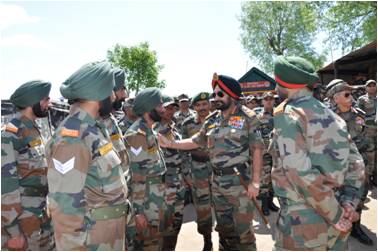 Chief of Army Staff, General Bikram Singh, visited headquarter Northern Command and the Srinagar based 15 Corps recently. The fact that the new Army Chief chose Northern Command as his first place of visit after assuming office points towards the importance that he will be according to the sensitive Jammu and Kashmir sector.

The visit gains significance in view of the localised political demand for modification in the existing security paradigm by tampering with the Armed Forces Special Powers Act and the issue of demilitarisation of Siachen. This apart, the unprovoked firing from across the border in the Krishna Ghati sector is also a matter of grave concern. It is also commonly perceived that infiltration bids are presently on the rise following melting of snow along the mountain passes. Even though the situation in the valley is well under control, pressure is mounting on terrorists operating over there to up the ante.

General Bikram Singh has extensive experience in the valley, having commanded a battalion, a Rashtriya Rifles sector and a corps over there, with distinction. The objective of his visit would have been to get an update on the existing situation since he has been out of the decision making loop with respect to this region for more than two years, while he was commanding the Eastern Army.

It was against this backdrop that the itinerary of the Chief included extensive discussions with senior army commanders in both Udhampur and Srinagar followed by courtesy calls to the Governor and Chief Minister of Jammu and Kashmir, with whom he enjoys a very good rapport from the time when he was commanding the Srinagar based15 Corps.

While at Udhampur, the Chief was given a detailed brief on the current security situation and the operational preparedness in Northern Command. He was presented the complex dynamics of the proxy war situation in the State. The Northern Army Commander, Lt General KT Parnaik, briefed the Chief on the efforts undertaken by the Indian army to curb infiltration by a combination of high technology, sensors, night vision devices and human intelligence resources. Effective deployment of troops to check intrusions was also highlighted. The Army Commander is said to have emphasised on the fact that Pakistan provided “cover fire” to infiltrators at the Indian posts in Poonch district. The level of terrorist presence in the hinterland also came up for discussion. At Srinagar the Army Chief was briefed by the Corps Commander followed by a visit to some forward areas to interact with troops on ground.

The interaction with civil dignitaries was also noteworthy. The Chief conferred with the Governor, NN Vohra for about an hour at Raj Bhawan, Srinagar. Various matters relating to the internal and external security situation and those having a bearing on security management were reviewed. The meeting with Chief Minister Omar Abdullah also dwelled on matters relating to the prevailing security situation in the state.

Since none of the dignitaries came out with a press statement after the meetings it can be safely presumed that there was a fair degree of convergence of views and no decision to go for an immediate change in the existing postures was made. This is a positive indication, since the fast improving situation in the valley makes it necessary to bring about a change only after due deliberation. The Army Chief, it seems, has been successful in gaining the confidence of the soldiers on ground and the civilian dignitaries which is a step in the right direction.