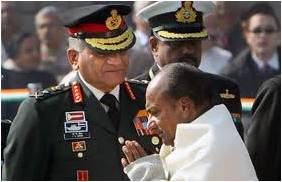 With TRPs soaring at the cost of the Army, news channels are flogging the issue of acrimony between the Army Chief, General VK Singh and the Ministry of Defence. Excited anchors are saying ‘The situation is changing every moment’ with the express desire of keeping viewers hooked on. Sadly, there is an element of truth in this assertion of the anchors since allegations and counter allegations are doing the rounds at a frantic pace.

The origin of this spat can be traced to the Date of Birth issue which was placed before the Supreme Court. The directive of the Hon’ble Court led to statements by the lawyer of the Army Chief reiterating that his client’s honour and integrity stood restored. Nevertheless, matters did not end there and a series of events deemed to be an offshoot of the original issue have now rocked the Nation with some startling revelations.

First the Army Chief came out with a statement alleging offer of a bribe by a retired Lt General on behalf of an arms vendor working in tandem with a public sector undertaking. The Army Chief said that he had reported the incident, which took place about a year and a half ago, to the Defence Minister, who also acknowledged having been kept in the loop. The nation is still wondering about the reason why the matter was not pursued. Now a CBI enquiry has been ordered to investigate the incident.

The fire of this controversy had not died down when a highly confidential communication by the Army Chief to the Prime Minister, detailing the equipment woes of the Nation, was mysteriously leaked to the Press setting about yet another round of discussions on the news channels. The Army Chief has already come on air to express outrage about the leak and has called it an act of high treason by the elusive perpetrator. Now an Intelligence Bureau inquiry has been ordered to investigate this issue.

To add fuel to the fire the retired Lt General, Tejinder Singh, who is alleged to have offered the bribe to the Chief and whose name was made public by the Defence Minister in the course of the Rajya Sabha debate has moved Court with a case of defamation against the Army Chief which has come up for hearing today.

In the meantime the Army Chief has slapped corruption charges against a serving Army General, Lt General Dalbir Singh, who is possibly next in line of succession as Army Chief after General Bikram Singh. He has demanded a CBI enquiry against the officer

In the meantime the Defence Minister has inaugurated the Defence Expo at Pragati Maidan, New Delhi and held a press conference over there. At the outset he said that the issues pertaining to the Expo would be dealt with before coming to the “Masala” . He assured the fourth estate that he would not run away from their queries.

On the subject of defence acquisition, which now forms the root of this controversy, the Defence Minister said:

• Despite financial constraints perpetrated by a slowing global economy the defence budget for the Year 2012-13, had been increased by 18%.

• Lack of indigenous state of the art technology is a reason for alarm.

• Participation of the private sector in the arms industry is being given a boost, albeit slowly.

• The government moves ahead with the acquisition process with due caution in pursuit of its stated policy of zero tolerance to corruption.

• The needs of the services are well registered but the MoD has to take the government on board while it meets the service requirements.

On the issue of the raging controversy he said:

• All three Chiefs enjoy the confidence of the government.

• The leak of the confidential document was an anti-national activity. The government would get to the root of the problem and the perpetrator would be given maximum punishment admissible under Indian law

This matter is being subject to a debate on Television channels only by a few retired Army personnel, spokespersons of political parties and some civilians. It is necessary to enlarge the scope to get a wholesome opinion. Readers of this post are requested to comment on the subject in the post itself and also give their opinion in the opinion poll. The result will be shared with media and the government.