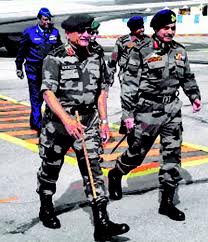 The Army Chief, General V K Singh visited the Corps Headquarters at Leh to attended the yearly Map exercise of the Corps. He was given a detailed brief on the operational aspects. He also interacted with the officers and Jawans at the Headquarters and emphasised on the requirement of extensive combat training, whilst braving the hardships of weather and terrain. He expressed satisfaction at the state of training of the troops deployed in the Corps Zone.

Mrs Bharti Singh, wife of the Army Chief, in a separate function felicitated 30 war widows from the Ladakh region.

The Northern most frontier of the country poses extraordinary challenges upon the troops deployed over there due to harsh weather conditions especially at the Siachen glacier. The importance of the region is derived from the ongoing border dispute with China and Pakistan’s military designs in the Northern Areas and in the Siachen region.