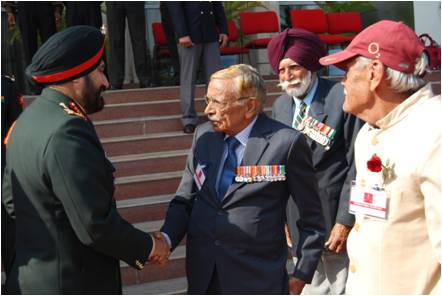 The Chief of Army Staff, General Bikram Singh, honoured army veterans and families of those who had participated in the Indo-China war 1962. The function was held at the Manekshaw Centre in New Delhi recently. Over 200 Army veterans and widows of soldiers who had lost their lives in the war were felicitated. The gathering also witnessed a huge turnout of next of kin of the brave soldiers; eminent among these were four sisters of Captain Mahavir Prasad, 1 Sikh, daughter of Subedar Joginder Singh, PVC, 1 Sikh, son of Brigadier Hoshiyar Singh, PVC, 3 Grendier and Mrs Niharika Naidu, daughter of (Late) Lt Colonel Awasthi who had lost his life in the war and wife of former Vice Chief of Army Staff, Lieutenant General ML Naidu.

While addressing the gathering the Army Chief lauded the gallantry and courage of all those who had fought the war despite great odds; he assured whole hearted support and continued assistance to the families by the Army. A narration of the 1962 war in the form of a movie clip highlighted how the Indian troops braved innumerable hardships to safeguard the nation’s territorial integrity undeterred by adverse terrain and hostile weather conditions. An impressive exhibition of photographs of troops in gallant action and accounts of various battles was laid out. Information kiosks of various welfare schemes and information related to housing schemes, entitlements to next of kin/ex servicemen, placement opportunities and resettlement programmes were installed at the venue. In addition, a medical camp was organised.

This is a case of too less, too late with the courageous community having been kept in ignominy for decades just to avoid disturbing a belligerent neighbour. However, in India such obduracy can be expected and any attempt to overcome the same is always welcome. The matter should not stop here; this being the 50th anniversary year of the war, many more such initiatives need to be taken to ensure that the present and future generations are made well aware of the sacrifices made by a gallant few to preserve the sovereignty and integrity of the nation against great odds. This has nothing to do with diplomacy, it simply entails remembering those who fought and fell in the national cause and surely there should be no problems in such an initiative.