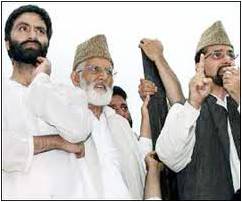 Jammu and Kashmir, these days, is abuzz with activity. The fifteenth phase of the Panchayat elections has been successfully completed, thus bringing much cheer on the face of Chief minister Omar Abdullah. The overall voter turn-out stands at an impressive eighty per cent. The greater victory for democracy, however, lies in the fact that one of the places included in this last round, Kishtwar, which has for long been a terrorist stronghold witnessed

brisk voting. Meanwhile, efforts are on to woo the Kashmiri Pandits back to the valley by offering to them jobs and a secure environment. It is indeed important that, with normalcy fast becoming a reality, the original residents of the valley return to participate in and contribute to the society and civilisation of their forefathers,

Despite signals of normalcy and people at large being quite content, the trouble mongers are at work again. Whereas on the one hand people were defying terrorist diktats and coming out to participate in the democratic process, the Hurriyat and other separatist elements are busy hatching schemes to disrupt the peace and tranquillity of the region. Mirwaiz Omar Farooq recently went to European countries, hat in hand, looking for some elusive support. Now, the separatist camp is spreading a jubilant message within the Valley that the Mirwaiz’s efforts have borne fruit and the European Union has linked the Kashmir issue with signing of the Free Trade Agreement with India. Interestingly, this great piece of news has been carried only by a few Kashmir based newspapers with very obvious affiliations. It finds no mention anywhere else in the Indian or the European media. While spreading this propaganda, what is being conveniently forgotten is that the recession plagued economies of Europe need India for resurrection and not the other way round.

Meanwhile, Syed Ali Shah Geelani is following his time tested route of calling for Bandhs. In the absence of a credible agenda to disrupt normal life, skeletons are being taken out from the closet to ferment trouble. The latest Bandh call on June, 11, which is the day a young Kashmiri, Tufail Matoo, died in Srinagar in 2010 due to a Hurriyat sponsored disruption and stone pelting exercise, has elicited minimal response. No untoward incident was reported. One hopes that good sense will prevail and such nefarious agendas will not succeed in hijacking the much needed peace in the Valley. What is most surprising is the complete lack of conscience that Geelani and those of his ilk display. They are always on the lookout for an opportunity to stage protests, cause damage to the life and property, gain enough media attention to get the Central government to announce another lucrative package and most importantly belittle the honest efforts of the security forces. Such has been their modus operandi for the past few years. Needless to say, the damage caused was of a degree which left the common man, especially the poorer segments, gasping for survival.

It is a gospel truth that the Geelani’s of Kashmir receives their orders from the rogue elements of Pakistan. So we will see how the “mentors” are faring and how much support can be expected from them in the future. Pakistan has lost whatever little credibility it had in the international sphere. Its greatest protector, the US, is openly castigating the country and its army for maintaining clandestine links with terrorist organisations located within its territory. The CIA chief, Leon Panetta, who is also tipped to become the next Defence Secretary of the US, during his recent visit to Pakistan, expressed his displeasure to the Army Chief General Pervez Kiyani and the ISI supremo Lieutenant General Shuja Pasha. He categorically stated that information on al Qaeda ammunition dens had been often passed to the Pakistani authorities who were not been able to recover anything because the militants were tipped off. Panetta had come with a proposal to establish a joint intelligence team which the sulking ISI did not agree to. The Pakistani Army further disallowed US operations from Pakistani soil. Panetta has returned back empty handed and the fallout of this unsuccessful visit will be seen soon enough. Significantly, the CIA chief and Afghan President were greeted to Pakistan with two bomb explosions, minutes apart, in the northwest Pakistani city of Peshawar which killed 34 people and injuring more than 100 in one of the deadliest attacks since the U.S. raid that killed Osama bin Laden last month. It can be safely assumed that, the Pakistani army is fighting both international pressure and domestic ridicule, the elitist position that it once enjoyed is fast receding.

The role of the Pakistani army in planning and executing terrorist operations on Indian soil has, at last, been clearly established. Confessions made by both Tahawwur Rana and David Haedley in the course of their trial in the US have spilled the beans on Pakistan’s links to proliferation of terror in India, corroborating what India has always maintained about Pakistan’s less than altruistic motives in supporting the Kashmiri struggle.

Sooner than later the futility of the demand for Azaadi which is the cornerstone of the separatist ideology is going to dawn on all stakeholders (and the signals are there that the process of mass awakening is already underway) and the separatist movement which is already gasping for breath, will lose whatever little steam it has left in it. As the separatists fight their last battle, the State government will have to stand firm on its commitment to provide a secure environment to the people of Jammu and Kashmir The separatists have to be sent an unambiguous message that they will not be allowed to hijack the constituency of peace.