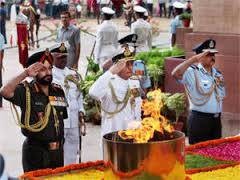 The issue of a single point contact of the three services with the government (Ministry of Defence) in the form of a five star general designated as Chief of Defence Staff (CDS) is once again gaining momentum. The matter has been a subject of innumerable debates and speculations over the years. As is usual with everything connected with defence there is undue procrastination and bureaucratic hurdles coming in the way of decision making in this matter. The issue normally stays on a back burner and comes up for speculation when a service chief is about to retire. One cannot help getting a feeling that it is highlighted through a gullible media only for personal considerations rather than any professional commitment. This instance is no different considering that the Air Chief, Air Marshal NAK Browne, is approaching retirement on December, 31.

This time, however, it is not the Air Marshal whose name that is doing the rounds but that of the Army Chief, General Bikram Singh, who will become the senior most once the Air Chief retires. The appointment being speculated upon is not of a CDS with five star trappings but that of a permanent Chairman of Chief of Staff Committee (CoSC). The CoSC is an interim sort of a designation created to cover the long gestation period between the recommendation of instituting a CDS and its acceptance and implementation by the government. Presently, COSC is an additional responsibility vested upon the senior most service chief. Rumours suggest that the government is mulling over the possibility of appointing a permanent incumbent for the job. In effect it would mean that there will be four service chief ranking, four star generals in the hierarchy rather than the existing three with one holding the portfolio of the CoSC permanently.

In this regard it would be serve well to revisit a drama that has been played out in Pakistan in a similar matter recently. Nawaz Sharif wanted to make his chosen Lt General Raheel Sharif the army chief but was facing a difficulty because the all powerful General Ashfaq Pervez Kayani was rooting for the senior most, Lt General Haroon Aslam, whom Nawaz Sharif did not want due to his role in the Musharraf led coup that ousted him. To placate General Kayani, General Haroon Aslam was offered the job of Chairman Joint Chief of Staff Committee similar to the CoSC. He refused and preferred to go on retirement. This incident proves beyond doubt the low esteem at which the post of a CoSC is held by the service hierarchy. It would be interesting to see if General Bikram Singh agrees to be thus sidelined much before his tenure as army chief culminates.

The opposition has cautioned the government to move with due deliberation in consideration of the fact that elections are impending and such a major decision would not be in order. There is merit in this caution and it remains to be seen as to how the government reacts to the same.