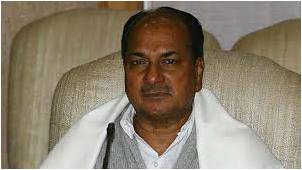 Even as 27 leaders and workers of his party lie dead after one of the deadliest attacks in the history of Naxalism, Defence Minister AK Antony, has categorically ruled out deployment of Army in anti-Naxal operations. What is most interesting about this minister is the confidence with which he says NO to any and everything and gets away with it. One cannot remember the last time, if ever, when he made an emphatic statement that the defence forces of the country will “do something”. What we get to hear is, no reaction to beheading of Indian soldiers, no reaction to deep incursions in Indian territory, no raising of additional corps in the Eastern sector, no weapons procurement, no national war memorial, no pay hike, no enhanced pension benefits – no, no, no and no!!

On top of it he has demonstrated a unique efficiency in furthering the career prospects of his bureaucratic subordinates who follow his passive line without a murmur. Pliant members of the Antony “do nothing brigade” are getting plum jobs within and outside the bureaucracy and even on retirement. Whenever his party is looking for a docile person to head a sensitive post AK Antony with his penchant of nurturing such talent comes to the rescue.

The problem would be bearable if it would stop at the level of the Defence Minister and his bureaucratic assistants. What is causing widespread worry is that the service chiefs may also be compelled into becoming members of this exclusive club. Of course, one does not expect the chiefs to do any such thing but the possibility cannot be ruled out.

Coming back to the sad Naxal issue, the minister needs to understand that procedures, institutions and methods that he has waxed eloquently about in his statement, are for the law abiding citizens of the country; they mean nothing to those out to wage war against the nation. The minister would do a great service by desisting from mouthing irrelevant platitudes at a time when the Nation is bleeding from a nasty terrorist attack. He could have said that no stone will be left unturned to rid the country of the Naxal menace in the shortest period of time. At least the people would have felt a little better by the ray of hope that the defence services of the country will react when the need arises. If this was too much he could have desisted from making a statement at all. Whatever the case, he should not bring down the morale of the nation when it is already reeling with grief.