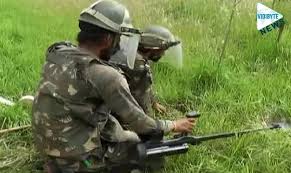 As a part of Operation Aman, the army recently handed over a large chunk of agricultural land to the locals in Morha Kampla, Nowshera that had been mined during mobilisation of Indian troops during Operation Parakram in 2001-02.

The demining operation was launched soon after the stand down of troops; by 2006 a major portion of the mine fields were cleared and the land handed over to its owners. In certain area along the Line of Control (LOC) remnants remained due to difficulty faced in demining in hill areas and threat perceptions.

The army is committed to removing these pockets. Handing over of the land in Mohra Kamplan was a part of this commitment. Some land in Saria and Channi in Mirpur, Rajouri; Azambad in Poonch; and Budhwal in Samba has also been demined and handed over in the last one year.

Mining is a military operational activity that has drawn a lot of attention across the world. This is because of the indiscriminate nature of the weapon that stays on long after the conflict is over and causes damage to civilians and livestock apart from the combatants.

India perceives landmines as defensive weapon to be used in the eventuality of a conventional war and against foreign sponsored insurgency. Mines, therefore, have been used by India in all the wars fought post Independence. Mines are also being used to check infiltration and stop hostile movement from across the LOC.

India supports the vision of a world free from the threat of anti-personnel mines. There are, unfortunately, limitations that constrain the country from being part of the global conventions that support total eradication of mines.

The security concerns articulated by India are legitimate and justified in view of the long borders that the country shares with inimical neighbours. More critical is the fact that these borders and LOC are not based on any natural obstacle which makes use of mines as a defensive weapon incumbent in case of a conflict. Once alternate technologies are available, India would be very glad to ban anti-personnel landmines.

It is being argued that post fencing of the LOC, anti-personal mines can be dispensed with. Anti-personal mines have been reduced greatly ever since the fence has been put in place. There are, however, some areas where fencing is not possible or is weak due to heavy snowfall. In such places, due to tactical considerations, mining has to be resorted to. Minefields act as a psychological barrier for the infiltrators.

Mines laid by the Indian Army are not the only reason for death and injury to civilians and livestock in along the International Border and LOC in Jammu and Kashmir. Casualties occur due to cross border fire (also called ceasefire violations) emanating from Pakistan; from unexploded shells due to this fire and due to Improvised Explosive Devices (IEDs) used by terrorists.

In 2013, the Indian Army released photographs of landmines that were planted on Indian soil by Pakistani troops. Lt General KT Parnaik, then Army Commander of the Northern Command, showed these mines with Pakistani markings to the media and also shared the proof with Pakistan at the flag meeting.

Statutes of the Geneva Conventions have laid down conditions for mining and de-mining. Mined areas were required to be marked with a wire fence and a mine symbol needs to be placed there. De-mining is required to be done earliest after the operational necessity ceases to exist. India, over the years, has strictly adhered to the Geneva Conventions.

In recent times, there has been a global movement to ban mines altogether. The movement was given momentum by the late Princess Diana and it resulted in the inking of the 1997 Convention on the Prohibition of the Use, Stockpiling, Production and Transfer of Anti-Personnel Mines and on their Destruction, also called the Mine Ban Treaty.

India is not a signatory of this convention due to i its inherent security constraints. Pressure comes on India also from the International Campaign to Ban Minefields (ICBM) but the country has refused to commit to something that is against its security interest.

Be that as it may, India is very conscious about the grave risk, inconvenience and physical damage being caused by anti-personal mines to civilians living in the frontier areas The government has in place a proactive policy to deal with mine casualties. They are paid compensation by both the state and the central government and given priority in jobs in the disabled category.

A lot of effort is put in by the government as well as the army to provide artificial limbs to those unfortunately afflicted.

Army’s Artificial Limb Centre provides prostheses for mine survives. In 2005, the army opened an artificial limb repair centre in Poonch. The army also consistently helps mine survivors and polio victims with the close cooperation of certain NGOs involved in this social service. One prominent example is the Pritam Spiritual Foundation Trust being run in Poonch by Shri Jagbir Singh Sudan since 1990. The trust provides artificial limbs in collaboration with Bhagwan Mahavir Viklang Sayta Samiti (BMVSS) famous as providers of the Jaipur foot.

The army works in close coordination with this trust and it has also be awarded the Chief of Army’s Staff’s Commendation card in 1997. The state government has also opened a Composite Rehabilitation Centre in Srinagar which provides ALIMCO type artificial limbs free of cost to mine victims.

Use of mines is definitely a military activity that should be banned. India is conscious of its obligation in this regard and is doing everything possible to reduce dependency on the same as a weapon of defense.  Where the use is imperative, all possible precautions are taken and due compensation provided to the unfortunate casualties. It is because of such humane policies of the government applied on ground by the Indian army that casualty figures are very small when compared to the damage being caused by mines across the world.