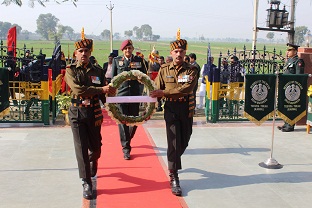 The border town of Fazilka, Punjab, held a ceremony in remembrance of the heroism and valour of the brave soldiers who laid down their lives fighting for the motherland there during the 1971 Indo-Pakistan war.

The ”Saviours of Fazilka” fought the Battle of Beriwala, which raged on uninterrupted for 14 days from December 3, 1971 onwards. It was undoubtedly one of the fiercest actions of the 1971 war.

In this epic battle, 11 officers, 10 Junior Commissioned Officers (JCOs) and 185 soldiers embraced martyrdom while 19 officers, 11 JCOs and 334 soldiers were wounded on the battlefield.  For displaying conspicuous gallantry, one Mahavir Chakra, six Vir Chakra and four mention-in-dispatches were awarded.

The ceremony organised by the Amogh Division of the Indian Army witnessed active participation by the general public. The civil administration came forward to assist the Army in organising the event.

Due respects were paid to the martyrs by laying of Wreaths at the Fazilka War Memorial. A ‘Marathon’ was organised wherein people participated with a lot of enthusiasm despite the chilly weather. Prizes were given to the winning participants.

To remember the heroic act and valour of the soldiers, the children of Fazilka put up a mesmerising cultural programme which filled everyone’s heart with patriotism.

Events such as painting, debate and various other activities were organised in Schools across Fazilka on the eve of Vijay Diwas and the winners were felicitated.

The General Officer Commanding the Amogh Division, Major General Bipin Bakshi exhorted all ranks of the Division to rededicate themselves to the service of the nation and emulate the devotion of war veterans and martyrs.

The event was also graced by Mrs Santosh Rana w/o Late Major KS Rana of 15 RAJPUT who attained martyrdom during the operations in Fazilka and many war heroes and Veer Naris (War Widows).  The mere presence of these ‘Veer Naris’ and war veterans was a source of great inspiration for the people of Fazilka.