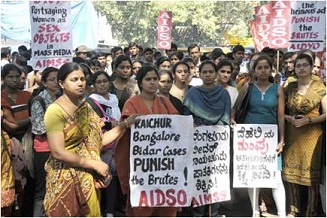 Unfortunate as it may be but the truth is that our world is replete with stereotypes. Stereotypes are essentially mental constructs that are built through social engineering and strengthened by communication agents such as media. The human mind has a tendency to develop stereotypes regarding almost everything; these develop to act as prisms through which we view and understand everyday life situations. Our reactions to any situation also, as a matter of course, are conditioned by the stereotypes that we have developed. Nowhere has this fact been better illustrated than in the unfortunate case of the gang rape of a young girl student in the national capital region and its social and political fallout.

In concert with the established stereotype the opposition to the Union Government latched on to this issue and used it as a whip to flog the government with. Non-state actors, silent for so long, also jumped on to the bandwagon and damned the government for not having a good enough legislation in place to deal with such crimes against women. The impression that was being created was that the government is personally answerable and responsible for the action of each citizen of this country. The Government on its part moved with unprecedented alacrity; a committee, under the chairmanship of the venerable Justice Verma, was established to take a re-look at the existing laws to deal with rape. The recommendations of the committee were accepted in part and converted into an ordinance pending their translation into a new, invigorated law governing sexual assault in the country.

This committee too was not free of its biases that had been fed on mental stereotypes. In an effort to go all out to protect the rights of the weaker and fairer (more stereotypes!!) sex, it went overboard and transgressed it’s given mandate by recommending a change in the armed forces special powers act (AFSPA) that governs the functioning of the country’s armed forces in sensitive counter insurgency and counter terrorism environments. The recommendations stipulated amendments to the act to facilitate trial by civil court of defence personnel under suspicion of having committed this crime while on duty in such disturbed areas.

There are twin stereotypes at work over here. One is the stereotype of the female who is at the receiving end and who suffers the most during wars and war-like situations. This is one of the most popular and widely accepted constructs of the disadvantaged situation of women. In this regard however, the question that arises is – how true is it that women are at greater risk of rape in places where security forces have been vested with special powers than in a normal environment? Even a cursory look at the daily newspapers of just ten days at random will prove this notion as flawed. On an average there is at least one rape reported in newspapers daily in places that are said to be normal and hardly any such incident is reported from disturbed areas where the AFSPA is effective. There may be one such incident after a few years and there too the entire military establishment is subjected to a rigorous and sometimes downright humiliating media

trial which leads to the formation of some more flawed stereotypes.

The second stereotype that is at work here is even more flawed, not to say dangerous. This deals with the pre-conceived notion that the personnel deployed by the state to protect its own denizens are actually themselves suspect of violating the person and property of those that they are there to protect. Agreed that the forces are not free of aberrant behaviour but then which segment of the state or any other organisation is? Is the judiciary totally above suspicion for that matter? When considering the legal aspect, once there is a proper procedure in place within the military system and the procedure has the approval of the very state that has established the judiciary, do we logically have any right to doubt its fair and honest functioning? Would that not amount to pointing fingers at our own self?

There are other more significant aspects that need to be considered in the aftermath of the New Delhi gang rape and other such unfortunate incidents that are continuing unabated. Such aspects would go beyond the public generated stereotypical notions. Just because the stereotypical image of the police force is one of laxity and negligence it becomes fairly easy to blame everything on dereliction of duty on its part. Why does the society not blame itself for such a heinous crime having been committed? Why we, as a people, are ashamed of admitting our own shortcomings and why are we so quick to identify, damn and hang the first scapegoat we can lay our hands on?

Fortunately, the Government of the day has refrained from acting in haste and amending the law that has been put in place primarily for the smooth and peaceful functioning of the state machinery itself. The various non-state actors that continue to clamour for the change in the provisions of the said act need to take a reality check and deconstruct the stereotypes that are making them behave in this irrational manner. All legislations are basically tools and how effective these are depends on the ones who are using or for that matter misusing them. While there is no reason to doubt the integrity of our forces at large, there is every possibility that too much bias in the favour of any one particular segment in any law may prove to be counter-productive. This has already been witnessed in the case of anti-dowry laws which were blatantly misused by not a small number of women. We cannot risk the same happening in case of our forces. It is better to move with as much caution as possible and of course rise above stereotypes.