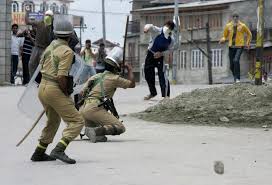 Kashmir witnessed an unprecedented level of civil unrest in mid-2016 post the killing of a local terrorist, Burhan Wani. During the protests, the security forces used pellet guns to fend off unruly civilians, mostly young boys, who indulged in stone pelting and assault upon police and paramilitary force personnel. The use of pellet guns led to injuries, in some cases of a serious nature involving loss of eyesight too.

The matter escalated to the extent of being referred to the judiciary and resulted in the Supreme Court asking the centre to consider effective means other than use of pellet guns to quell stone pelting in the Kashmir valley. It is slated to come up for a hearing on April, 10.

It seems from the statements permeating on the subject from the parliament that the government would, respectfully, recommend allowing security forces in the Kashmir Valley to continue performing their assigned duty in the best possible manner that circumstances permit. Security experts also predominantly agree with this contention.

It is widely accepted that in times of unrest, security forces in Kashmir are called upon to deal with a mob and not with protestors, demonstrators or a crowd as is normal.

The hysteria and belligerence that the mob generates in Kashmir has no comparison in the rest of the world. Frenzied young boys attack the security forces with stones from different directions; when they come dangerously close the security forces are left with no option but to fire in self defence. Under these circumstances, firing from a pellet gun is a less lethal option than the use of fire arms. It does cause injury but, in most cases, does not lead to loss of life.

It is notable that the security forces use other methods like water cannons, tear gas, pepper filled grenades etc. before firing the pellet guns which are a last resort.

Experts feel that the best alternative to the pellet gun lies in the political and social and technological domain.

“There have been many occasions when the Indian army has provided to the political leadership of the country a platform of stability that could have facilitated initiation of a political process to usher peace in the Kashmir Valley. A few golden opportunities within this millennium came by but were missed by the incumbent governments. The ultimate solution has to come from the political and social domain,” says Col. (Retd) Jaibans Singh, a reputed security expert who specialises in conflict studies in Jammu and Kashmir.

“Parents and elders in Kashmir need to control the adolescents who are being put on the way ward path by inimical forces that have a vested interest in keeping the Kashmir Valley on the boil. More impact at the international level can be attained through a peaceful demonstration with placards and speeches than through destructive mob behaviour. The objective of the riots is to keep finances flowing from foreign clients,” says Mehtab Karan Singh, a son-of-the-soil from Jammu and Kashmir presently based in the United States.

The segment of the Kashmir media that is working for inimical foreign forces wishes to cash in on the pellet injuries by painting security forces as the villains of the piece. The contention, however, lacks conviction since videos showing mob violence of an unprecedented nature obviate any sympathy that would go the way of the rioters. It is well known that those being injured are out in the street to cause harm to the administrators of law and order and that too despite imposition of curfew by the government.

Be that as it may, the government is attempting to come up with some effective ways to control the mobs. At the technological level, the cartridge of the pellet guns has been customised to throw less number of pellets and thus reduce its lethality. The guns too have been fitted with a deflector on the muzzle which severely reduces the spread of the pellets.

The Standard Operating Procedures (SOP) of security forces, in any case, calls for targeting the legs of rioters and that to in extremely volatile conditions; now, with the number and spread of pellets being reduced, the chances of hitting the upper body will go down. On the flip side, so will the effectiveness of the equipment.

The Defence Research and Development Organisation (DRDO) has been tasked to find some more viable alternatives. The crowd control equipment being used across the world is also being studied to find a better alternative. In this regard chilli filled PAVA shells that have been used in the United States earlier are being looked as more closely.

It is most important to understand and appreciate the sensitive conditions under which the security forces have to discharge their duties in Jammu and Kashmir, particularly the Kashmir Valley. Theirs can be classified as the most difficult and thankless job in the country, yet, they go about the same with utmost composure and dedication.

The nation has to do its bit in assisting to make the job a bit easier and in this the political leadership, the civil society and the media have a big role play. Innovative means have to be used to dissuade the youth from the self-destructive path that they are following. For this, a mass social movement is the best recourse followed by a use of better technology to control the situation on ground. Replacing one riot control equipment with another, however, will pay little dividend; the problem needs to be addressed at its very roots.

Under the circumstances and with due respects to the apex court, a professional assessment of the situation in the Kashmir valley would lead to a conclusion that pellet guns and other available riot control equipment available with the security forces will need to be used, with maximum restraint, till a better alternative presents itself. When a solution does come by, nobody will be as happy as the security forces.

(Dr. Simrit Kahlon is an academician and a reputed security analyst)