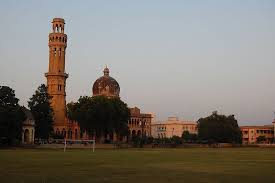 A national seminar, “South Asia: Security Challenges and Opportunities” was organised by the department of defence and strategic Studies of Allahabad University on April, 9 and 10, 2014. The inaugural address delivered by Air Marshal J Chauhan, Air Officer Commanding -in – Chief of the Central Air Command of Indian Air Force set the pace for a brain storming session that brought forth vibrant ideas on national defence and security perspectives.

The speakers had come from across India! There was representation from well known Delhi based defence and security think tanks like the Centre for Air Power Studies (CAPS) and Centre for Land Warfare Studies (CLAWS). There was a notable representation from the departments of defence and security studies of other universities to include Gorakhpur University, Meerut University and the newly created, highly prestigious Central University of Jammu and Kashmir. Scholars in the field of political science, economics etc addressed the seminar as did serving defence personnel who spoke on matters related to defence, nuclear doctrines etc.

A notable feature of the seminar was the attention paid to security aspects pertaining to Jammu and Kashmir. A special guest speaker was Jaibans Singh, Chief Editor of a web site www.defenceinfo.com that relates to security in Jammu and Kashmir and as a corollary Pakistan, China, Afghanistan and the Indian army. While most speakers also touched upon Jammu and Kashmir, Jaibans Singh spoke exclusively on the subject to an audience of students and intellectuals who elicited a definite interest in the status of the sensitive state.

The most important point made by Jaibans Singh in his address was that Indian security challenges may be multifarious but ultimately the matter gets back to Jammu and Kashmir, more so in the context of Pakistan, China and the extended neighbourhood of Afghanistan, Nepal and Central Asian Republics. It is India’s security concerns and sensitivity in Jammu and Kashmir that dictates the security paradigm of the entire region.

The biggest security challenge from Pakistan and China relates to the territory of Jammu and Kashmir that is in illegal and forcible occupation of these two countries. The second big issue is resolution of the festering border dispute. There is a need to ensure that the line of actual control, the actual ground position line and the line of control are re-designated as “international border” as soon as is possible.

Territories of Jammu and Kashmir under illegal and forcible occupation of Chine and Pakistan like Aksai chin, Gilgit-Baltistan and Pakistan Occupied Kashmir need to be looked upon in the strategic, nationalist and humanitarian perspective. Since times immemorial these areas, especially in Gilgit-Baltistan, have been the strategic link for India with Central Asian Republics, Afghanistan and even China; their illegal occupation by foreign powers has an adverse effect on India’s relations with these neighbouring countries both strategically and economically. From the nationalist perspective it is quite evident that India cannot sit idle when its territories are under foreign control. The most significant, however, is the human dimension of the problem. Here is a body of people who are citizens of India and are being subjected to the basest form of subjugation by foreign powers. Untold atrocities are being committed on these people by Pakistan. Blatant killings in the name of religion, open colonisations, illegal transfer of land on “lease” to China and a host of other utterly condemnable atrocities are being inflicted on the people with impunity. India needs to do everything in its power to stop this barbaric onslaught on its bona-fide citizens.

On the subject of terrorism Jaibans Singh held forth the view that terrorism continues to pose a security challenge to the region but the intensity has reduced considerably. It emerged from the discussion that the any semblance of ideologically based insurgency has been done away with and what the region is witnessing now is outright foreign sponsored terrorism with numbers in a few hundred only. Total eradication of this menace is being hampered by infiltration of new intake from across the border. Even though credible steps like fencing of the line of control and deployment of electronic surveillance devices have been resorted to one hundred percent success in counter infiltration is difficult to achieve due to harsh terrain and weather conditions.

The security challenge posed by the politics of separatism was also referred to. The losses being suffered by the people due to disruptive politics of the separatist and the misinformation being spread internationally about the situation in Kashmir valley is a critical security aspect that needs urgent attention; not only does it sow seeds of dissension and divisiveness, it impacts economic security of the region by giving an impression of instability which draws away investment; Frequent shut downs impact business and normal life especially of the poor daily wagers. The need to deal with the malaise legally and politically was highlighted.

In conclusion, Jaibans Singh, appreciated the initiative taken by Allahabad university to give a central place to security in Jammu and Kashmir in its national seminar and the interest that the subject generated among the students and faculty. He reiterated the complex nature of security challenge in the state that encompasses economic, geographic, historic and social facets apart from the military imperative of being an important frontier state of the nation. He called upon the faculty to organise a workshop where the subject could be dealt with in detail and promised to make available many experts on the subject.

Jammu and Kashmir continues to be an enigma for many in the country who have not had an opportunity to visit the beautiful land and have to depend on frivolous media inputs to piece together an opinion. An opportunity towards scholarly discourse on the subject across the country would reap immense benefits. It is in this regard that think tanks like the Delhi based JK Study centre are rendering sterling service. Such discourses will not only impart correct information but will also help generate original, out of the box ideas for dealing with the complex subject.