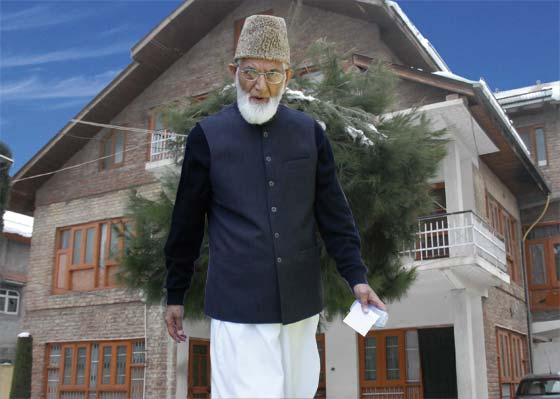 Ali Shah Geelani, the 90 year old Kashmiri separatist leader aligned with the All Party Hurriyat Conference (Hurriyat), has suddenly resigned from the separatist conglomerate. An irrelevant person leaving an irrelevant organisation does not merit any discussion or comment. Nevertheless, since he maintains pretensions of being a leader of the Kashmiris there is a case to pen down a tail piece.

More than two decades back, on April, 24, 1998, Geelani wrested control of the Hurriyat from Mirwaiz Umar Farooq and went on to become the architect of the darkest, most turbulent period in the history of Kashmir. Under Mirwaiz, the conglomerate was not averse to a negotiated settlement of the Kashmir issue, with Pakistan as a party to the talks, and was in constant touch with the Indian Government. In the late 1990s, Pakistan’s Inter Services Intelligence (ISI) became quite disenchanted by the lackluster performance of Hurriyat. Its constant internal squabbling was not taking the separatist movement anywhere despite a colossal expenditure by the ISI. The conglomerate lost credibility post success of the 1998 Lok Sabha elections.

It was under these circumstances that the elevation of Geelani as Chairman of Hurriyat and the unceremonious ouster of Mirwaiz came by. Geelani emerged as a pro-Pakistan, hard line kingpin of separatism in Kashmir. The complete radicalisation of the Hurriyat, its subservience to Pakistan and to the terrorist cadre is the legacy of Geelani. He brought with him the self defeating agenda of Jammu and Kashmir joining Pakistan and blatantly used the platform provided by the Hurriyat to propagate the same.

The constituents of the Hurriyat realised the danger of continuing with Geelani among their fold and attempted to sideline him. However, their internal contradictions, yet again, became their curse and a split within the conglomerate in 2003 put Geelani, once again, in the driving seat, after the unceremonious removal of then chairman Mohammad Abbas Ansari and suspension of the seven-member executive committee.

He remained, throughout, a points man for the ISI with no compunction in exploiting the Kashmir youth by pushing them towards the self destructive path of terrorism. His reminder energy was spent in keeping Kashmir in a state of perpetual shut down through muscle flexing by his army of goons. By so doing he ruined the economy of the region and caused terrible misery to those who live on daily wage.

In pursuance of his evil agenda, Geelani also became a very rich man. At the face of it, he maintained collection of Zakat (religious contribution) as his source of funds. In actuality, it is reported that he got vast funds through Hawala transactions from Pakistan, the annual amount running in crores of INR.  He has been badly hit by demonetisation and the National Investigation Agency (NIA) probe into his organisations illicit and criminal funding of terror and disruptive activity in the Kashmir Valley. The resultant choking of funds and arrest of the many conduits has caused complete disarray in his brand of politics. Known for screaming anti-India diatribe the loudest he suddenly became most accommodating  and has, in recent times, been at pains to emphasise that he was never against talks with the centre. This change of heart was motivated less by ideology and more by the fact that his son-in-law, Altaf Fantoosh, and many other functionaries of his party have been arrested under the ongoing NIA investigation.

Now, in his resignation letter he maintains that other members of the conglomerate have not responded to his concerns about the “independent functioning” of the Hurriyat branch in so-called Azad Kashmir (Pakistan Occupied Kashmir). In actuality, it is apparent that the Hurriyat has been undercutting Geelani and he has not liked it. “Today, you have not only violated all the rules and regulations and resorted to indiscipline, but rebelled against the leadership (his leadership)  openly and brazenly,” he says in the letter while also referring to “financial irregularities, nepotism, infighting, and a smear campaign to malign him.”

His second grouse is about the inability of Hurriyat representatives to get together a movement against the bifurcation of the state into two Union Territories and abrogation of Article 370 in August, 2019. He feels that Hurriyat has failed to counter New Delhi’s efforts while he was unable to act due to detention. He, of course, realises that Hurriyat was in no position to do anything but, with the letter and resignation, he is absolving himself and his loyalists from all responsibility.

He is at pains to clarify that the resignation is not a consequence of his failing health, “Neither the power of my heart and mind has ceased nor has there been any weakness in my spirit of freedom,” he says in the letter while apportioning all blame on the Hurriyat.

Thus has come to an end the times of a dogmatic, obdurate. self serving and double faced leader who had no compunction in using facilities provided by Indian Nation while castigating it openly. He is looked after, free of cost, in the best government hospitals like AIIMS. His children have received the best possible education in India and are pursuing lucrative professions in Pakistan, Saudi Arabia etc. far from the miseries of Kashmir. His “selfless sacrifice” has definitely been good for his family.

Geelani’s resignation will pave the way for a new Hurriyat leadership to be put in place. With his radical colleague, Masrat Alam, being in jail, Geelani has named his loyalist, Rawalpindi-based Syed Abdullah Geelani as his successor in Pakistan. He has, therefore, cleared the way for the ISI to continue  with its control over his organisation.

The Hurriyat has been steadily losing its clout and relevance since people have seen through its self serving and disruptive policies; they have understood that it is standing in the way of their desire for peace and prosperity. To this end, Geelani or anybody else from Hurriyat being there or not is quite immaterial. Out of respect for his colleagues, he could have quit gracefully while citing ill health, but no, even to the end he has remained egoistic and reactionary. Now, as he quits, Geelani needs to reflect on the role that he played in the death of thousands of young Kashmir boys by propagating the wrong and fallacious theory of independence.