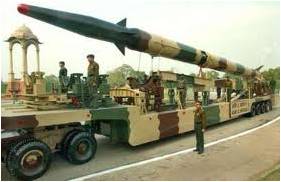 India is all set to test its 2,000-km range Agni-II missile from Wheeler Island off the Orissa coast next week. The test will be conducted by the Strategic Forces Command (SFC) of the Indian Army. The indigenously built weapon is a two-stage solid propelled ballistic missile that weighs 17 tonne and is 20 metre long. It can carry a payload of 1 tonne over a distance of 2,000 km. The missile is part of the Agni series, which included Agni-I with a 700-km range and Agni-III with a 3,500-km range. Agni-II is a ready-to-fire missile with a launch time of about 15 minutes. The missile uses solid propulsion booster and liquid propulsion upper state. The strap-down inertial navigation system provides the necessary guidance, accuracy and uses an advanced composite structure for protecting the payload during the re-entry phase. Agni-II, an already-proven missile, had developed snags twice consecutively during user training exercises in 2009, putting the entire DRDO fraternity in an embarrassing situation. However, during a similar test on May 17 last year, the missile was claimed to be tested successfully. .