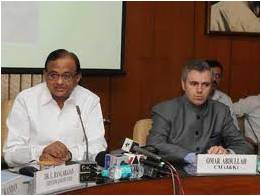 The last year passed off relatively peacefully in Jammu and Kashmir, particularly so, in the valley of Kashmir. For quite some time now, terrorist strikes have gone down, separatist leaders have been exposed for the pretenders that they are, tourists are back and business is thriving. The Union Home Minister, Mr. P.C. Chidambaram recently visited the state to review the security situation and to chart a road map for consolidating the gains of the last year. As expected, there was a demand from Chief Minister Omar Abdullah to revoke AFSPA at Jammu, Srinagar and Badgam. Interestingly, this recommendation continues to evoke stringent opposition from the leaders of the Congress party, which is a part of the coalition government. Madan Lal Sharma, the Congress Member of Parliament from Jammu has emphatically stated, “Time isn’t ripe for its (AFSPA) withdrawal.”

The predominant reason being cited for this recommendation is the falling graph of terrorist incidents. However what is probably being forgotten is that statistics, by themselves, have no value until the story they reveal is carefully discerned. The journey behind the falling graph of terrorist activity is one that has been undertaken by the people of the state with the vigilant support of the security forces. The joint relentless effort of these two segments helped to keep the state afloat when the dark waters of terrorism and separatism were threatening to engulf it.

This joint effort further steered the ship of the state into the calm waters of normalcy. In the process of reaching this destination, the people of Jammu and Kashmir and the security forces have paid a heavy price. Today, they have reached a position to heave a sigh of relief on having just stepped out of a highly volatile situation. However, they can under no circumstances afford to let down our guard and relax, thinking that the battle is truly won.

There are several reasons for this. Firstly, the terror network is still fully in place with Pakistan offering material and ideological support. This is fairly obvious from the statements being made those heading terrorist organisations based in Pakistan. There have been, during the past year, several infiltration bids by foreign terrorists armed to the teeth with complete support from across the border. It is only due to the vigilance of our security forces and the specific intelligence that is being provided to them by the people that such bids have been foiled. Were the army to leave the State to its own devices at this particular juncture it would mean throwing away all that has been gained at great personal and public cost.

The Chief Minister, who so vociferously demands the revocation of AFSPA and consequently the removal of the army from the scene, has in all his years in power done nothing at all to strengthen the state police organisation. So who is there to take over the responsibility of maintaining peace and security in the state, once the army is not there? It is very easy to sit on a well-guarded and secure podium and deliver populist statements to score brownie points in the political arena, but have such politicians ever stopped to consider that they are able to speak their mind purely because the security forces are there to ensure that no harm comes to them. In fact, where were these leaders when the state was reeling under the onslaught of terrorism and the separatists’ writ ran large? Why did they not dare to oppose the terrorists when they imposed the Hijab for women and did away with all nature of cultural freedom? Why did they not voice their opinion against the blatant ethnic cleansing that was carried out on both sides of the Pir Panjal? Were they not living in mortal fear of being exterminated themselves? Today when they have the freedom to fearlessly speak their minds they are spouting vacuous populist venom against the very system that has rescued them from the morass.

Populism is not the domain of the State leadership alone; the Union Home Minister, when questioned on the revocation of AFSPA, very astutely countered the question by stating that they at the Centre, were planning to “revisit the act” and it was under the consideration of the Cabinet Committee on Security (CCS). He is well aware that the proposed amendments will not be agreed upon by the other members of the CCS, particularly the Defence Minister. It does not take rocket science to understand that the security forces, in a situation of conflict, cannot be expected to fight with one hand tied behind their backs and this is exactly what implementation of his recommended amendments would entail.

Further, the Home Minister very cleverly kicked the ball back into the Chief Minister’s court by stating that the AFSPA would automatically go once the Disturbed Areas Act is removed from such areas that are considered to be out of the grip of terrorism. The Chief Minister, on his part, is well aware that the armed forces are vital for maintaining normalcy in the state. The pertinence of AFSPA is also clear to any and every discerning individual, most of all, the head of this turbulent state. So, one wonders about the need to constantly play to the gallery with typical political doublespeak. Such statements are likely to mislead the common man and drive a wedge between the armed forces and the civilians. Is the use of political gimmicks that have dangerous portents worth the price that the state may have to pay in terms of loss of peace and security? This remains a vital question even for the common man in Kashmir to ponder upon and debate.