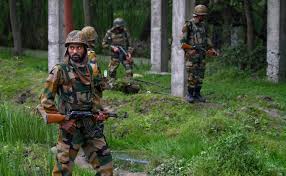 An interesting discussion on the Armed Forces Special Powers Act (AFSPA) was held on Lok Sabha Television Channel on 28 March 2016 from 5 PM to 6 PM The discussants considered application of the act in Jammu and Kashmir and the North East, the human rights issues involved and the way forward.

As the discussion progressed it was Jammu and Kashmir that held centre stage, with many interesting aspects coming to the fore front.

A panelist, Jaibans Singh, put forth a notable view that, in the existing environment of violence in the form of terrorism, subversion and insurrection across the globe, more and more countries and especially so democracies, are resorting to laws that restrict civil liberties.

He quoted the US PATRIOT Act and the British Counter terrorism Act 2008 to substantiate his point. Both legislations give sweeping powers to the security forces of their countries in terms of arrest, confinement, detention, freezing of accounts, access to private communication and other aspects. The provisions of these laws are much more stringent than those of AFSPA and they are applicable across the country.

The panelist, thereby, held forth the view that the Indian nation needs to empower its security forces all the more rather than diluting powers and giving space for proliferation of anti-national activities.

In cases where a malafide intention was established the army filed legal proceeding under the Army Act and exemplary punishment ranging from dismissal from service to imprisonment was meted out to the culprits. This argument clearly countered the misconceived and erroneous view that AFSPA gives to the army powers to function above the law. The fact is that the soldiers who operate under AFSPA are bound by a different set of laws.

The reports prepared by non-official human rights organization, it was said, depend on selective data which does not give a holistic view of the situation. Such organizations have also shown a proclivity to ignore the gross human rights violations that the terrorists inflict upon the innocent people of the land with their atrocities. By challenging the terrorists to the extent of putting their lives at stake the security forces operating in the region, if fact, are saviours of the people.

There was unanimous agreement on the need to bring to book security personnel who commit human rights violations.

Another panelist, Major General (retired) DK Mehta, spoke at length about the welfare measures initiated by the army under Operation Sadbhavna to assist the people who had been deprived of basic amenities due to the shadow of the gun.

The army has undertaken a number of initiatives in the field of education, health care, infrastructure development, empowerment of women and development of youth under Operation Sadbhavna and continues to do so.

The spontaneous outreach helped build a bond between the soldier and the common man that, in turn, led to their joining hands to defeat the evil of terrorism. The result is there for all to see; it would not have been possible for the army to first contain and then literally eradicate terrorism from the state without the active support of the people.

The third panelist, Major General (retired) GD Bakshi, held forth the view that the call for revocation of AFSPA was being made by such forces that wished to weaken the army in the state of Jammu and Kashmir and thus create space for the resurrection of terrorism. He said that the cult of violence in the Kashmir Valley was foreign sponsored and as such the level of vigilance cannot be decreased till such time that the foreign powers do not desist from their evil designs.

While building on this argument, Jaibans Singh said that revocation of AFSPA was essentially a political decision. The fact that it had not been taken by governments of both UPA and NDA indicated an across the board view of its revocation being against national interest at this point in time. He said that leaders of a majority of parties in the political landscape of Jammu and Kashmir like the BJP, Congress, Panthers Party and a few smaller ones were against revocation of the act.

Local mainstream parties like the National Conference and the PDP often exploit the issue as a political tool to pressurize the centre. They hold an ambivalent, opportunistic posture of the matter which cannot be taken seriously.

It is only groups like the All Party Hurriyat Conference (APHC) that speak forcefully for revocation of the act; the anti-people credentials of these groups have already been exposed and they stand marginalized in the state. Their views, therefore, are inconsequential.

To say that the people of the state want revocation of AFSPA would be fallacious since the motivated aspiration of a few cannot pass off as the desire of the majority.

The role of the media was also debated upon extensively during the discussion. Gen. DK Mehta spoke of the biased reporting by the local press in Kashmir, especially the vernacular segment, that showed a perceptible tilt towards forces of separatism and divisiveness.

Jaibans Singh spoke of the proclivity of the national television media to solicit a point of view predominantly from the Kashmir Valley while leaving the other regions of Jammu and Ladakh literally unrepresented.

The discussion highlighted many significant factors that need to be factored in while addressing the complex politico-security environment of terrorism and insurgency afflicted areas of the nation, especially Jammu and Kashmir. The government needs to take a realistic position that caters for the contemporary environment both within the nation and globally. The critical factors are security of the people, integrity of the nation and defeat of evil forces.